Which U.S. States Have Had the Most Mpox (Monkeypox) Cases per Capita in 2022? - NY Requirements Blog

Which U.S. States Have Had the Most Mpox (Monkeypox) Cases per Capita in 2022?
Posted by Julia Tortorice 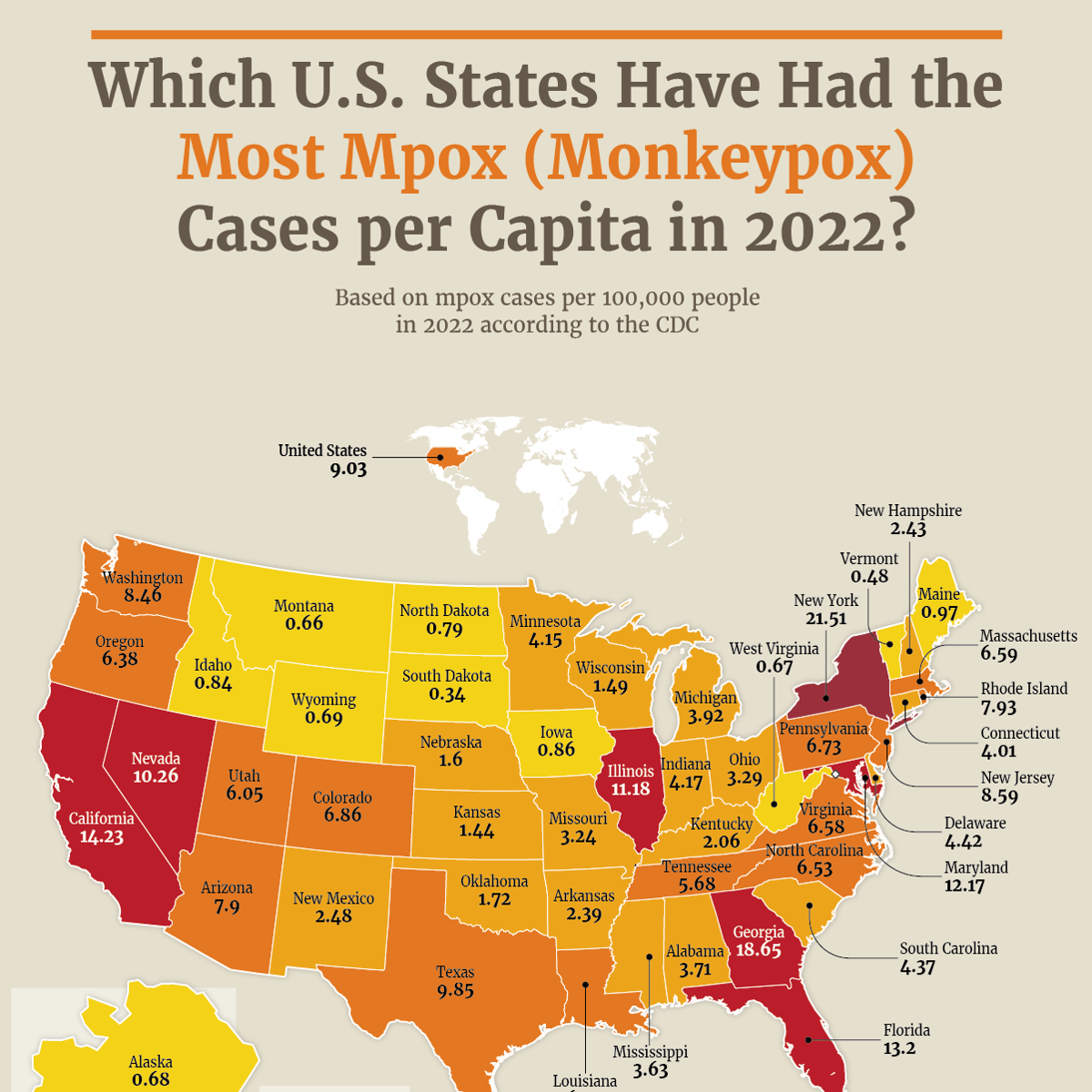 Since early May of 2022, cases of mpox, formerly known as monkeypox, have been reported from countries where the disease is not endemic (meaning countries where it is not regularly occurring). Most confirmed cases that involved recent travel were linked to visiting countries in Europe and North America; this is alarming because previous cases came from West or Central Africa, where the mpox virus is endemic. This is the first time in history when many mpox cases have been reported simultaneously in non-endemic and endemic countries that are geographically distant. Fortunately, most cases of mpox are not fatal, and there has been a vaccine approved under an Emergency Use Authorization due to the declaration of a public health emergency. But where are the most cases of monkeypox found in the United States? To help spread awareness, the team at NY Requirements has compiled data from the CDC to create a map of mpox rates by state:

What Is the New Name for Monkeypox?

In December 2022, the World Health Organization (WHO) announced that they would begin referring to monkeypox as “mpox,” and both names would be used simultaneously until the original name is phased out. Why the monkeypox name change? WHO reported that during the outbreak of monkeypox earlier in 2022, there was an influx of racist and stigmatizing language online and beyond. In an effort to minimize stigma and promote a safe, equal approach to world health, a new name for monkeypox has been declared by the World Health Organization under the International Classification of Diseases (ICD). We will be using these names interchangeably throughout this article, as the transition between them is ongoing.

Monkeypox, now recognized as mpox, is a rare disease caused by infection with the monkeypox virus. The monkeypox virus is part of the same virus family as variola virus, which causes smallpox. Mpox was discovered in 1958 when outbreaks of a pox-like disease occurred in communities of monkeys kept for research. Despite the name, the source of mpox is still unknown; furthermore, it can also be carried by rodents such rats, shrews, and squirrels. These rodents may be the primary factor in transmission among humans.

How Does Monkeypox Spread?

What Are the Symptoms of Mpox?

What U.S. States Have Monkeypox?

How Many Cases of Monkeypox Are There in the United States?

How Many People Have Died From Monkeypox in the U.S.?

Fortunately, mpox is rarely fatal — there were 20 total deaths in 2022.

What Is the Fatality Rate of Monkeypox?

There are two types of the monkeypox virus, Clade I and Clade II, and their fatality rates vary. Infections caused during the 2022 outbreak were from Clade II (Clade IIb specifically). More than 99% of people who are infected with this strain of mpox are likely to survive. The Clade I type of monkeypox has a fatality rate of around 10%.

Is There a Cure for Monkeypox?

While there are no specific treatments for the mpox virus, antiviral drugs that are used to protect against smallpox may be used to help treat mpox. That is because monkeypox and smallpox are similar in nature.

Which U.S. States Have Had the Most Mpox (Monkeypox) Cases per Capita in 2022?