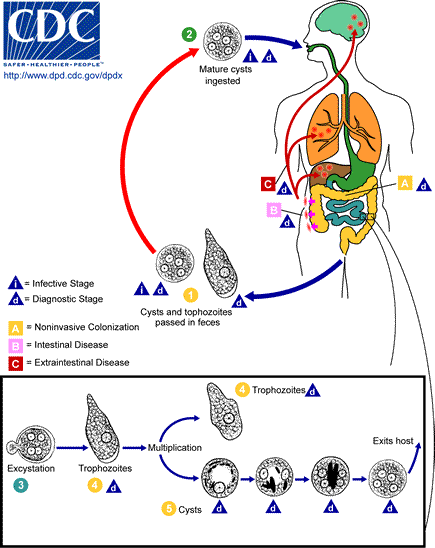 Cysts and trophozoites are passed in feces 1. Cysts are typically found in formed stool, whereas trophozoites are typically found in diarrheal stool. Infection by Entamoeba histolytica occurs by ingestion of mature cysts 2 in fecally contaminated food, water, or hands. Excystation 3 occurs in the small intestine and trophozoites 4 are released, which migrate to the large intestine. The trophozoites multiply by binary fission and produce cysts 5, and both stages are passed in the feces 1. Because of the protection conferred by their walls, the cysts can survive days to weeks in the external environment and are responsible for transmission. Trophozoites passed in the stool are rapidly destroyed once outside the body, and if ingested would not survive exposure to the gastric environment. In many cases, the trophozoites remain confined to the intestinal lumen (A: noninvasive infection) of individuals who are asymptomatic carriers, passing cysts in their stool. In some patients, the trophozoites invade the intestinal mucosa (B: intestinal disease), or, through the bloodstream, extraintestinal sites such as the liver, brain, and lungs (C: extraintestinal disease), with resultant pathologic manifestations. It has been established that the invasive and noninvasive forms represent two separate species, respectively E. histolytica and E. dispar. These two species are morphologically indistinguishable unless E. histolytica is observed with ingested red blood cells (erythrophagocystosis). Transmission can also occur through exposure to fecal matter during sexual contact (in which case not only cysts, but also trophozoites could prove infective).5