A Guide to Lyme Disease for Parents - NY Requirements Blog

A Guide to Lyme Disease for Parents
Posted by Julia Tortorice 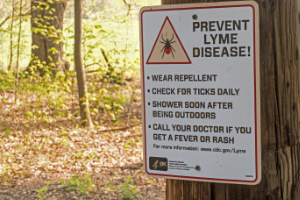 Anyone who spends a lot of time outdoors and lives in an area where deer ticks live needs to be aware and cautious of Lyme disease. Bites from deer ticks can transmit Lyme disease, which can have devastating effects if it's not diagnosed and treated quickly. Stay vigilant about tick bites, and watch for common symptoms of Lyme disease. If you notice early symptoms, see a doctor right away.

Lyme disease was recognized and classified in the United States in the 1970s. A group of people in Lyme, Connecticut, began experiencing serious health issues that included skin rashes, headaches, severe fatigue, swollen knees, and paralysis. Eventually, researchers found that all of the people with these mysterious symptoms had been bitten by ticks in the same region. By the mid-1970s, scientists had discovered and defined a new illness that they called Lyme disease.

Deer ticks transmit Lyme disease. The best way to prevent Lyme disease is to reduce exposure to ticks. Avoid areas that are infested with ticks, especially between the months of May and July (although deer ticks live throughout the year and will bite people during the winter, too). Deer ticks populate wooded areas and grasslands the most, but they also live in yards and gardens. Deer ticks feed on deer, so anywhere deer live will be likely to have deer ticks. If you have to walk through any of these areas, avoid bushes and overgrown grass. Wear long pants and long sleeves, light-colored clothes, shoes, and a hat. Don't sit near stone walls or on the ground. And apply a tick repellant to your clothes and shoes.

After you are bitten by an infected tick, Lyme disease symptoms typically start within three to 30 days. Symptoms include a red rash that feels warm and grows larger but does not itch and is not painful. Eventually, the rash fades, and it might look like a bull's-eye. People with Lyme disease also develop fever, chills, headache, fatigue, swollen lymph nodes, and muscle and joint aches. If the disease isn't treated, symptoms can include neck stiffness, severe headaches, a spreading rash, facial palsy, heart palpitations, dizziness, shortness of breath, nerve pain, and arthritis symptoms.

When a patient has symptoms in line with Lyme disease, a physician will assess the symptoms to determine the likelihood that Lyme disease is the diagnosis. If a patient lives in an area that is likely infested with deer ticks, a doctor can make a diagnosis without administering a blood test. If the probability of Lyme disease is only moderate, the doctor needs to perform a blood test within four weeks of symptom onset. A patient with nonspecific symptoms but unexplained malaise that lasts for several weeks who lives in an area where deer ticks are present should have a blood test to rule out Lyme disease. Blood tests are often negative during the early weeks of Lyme disease. All initial tests, whether negative or positive, should be followed with a Western blot test that can detect more specific evidence of Lyme disease.

Treatment of Lyme disease usually involves a course of oral antibiotics that lasts for several weeks. It's important to finish all antibiotics, even if symptoms begin to subside. If oral antibiotics don't resolve the symptoms, it's possible that the disease is affecting the central nervous system. In this case, intravenous antibiotics will likely be necessary. Patients who have significant pain from arthritis symptoms may also be prescribed an anti-inflammatory medication.