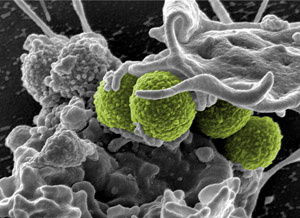 Small peptides kill bacteria in various ways, possibly making it the newest class of antibiotics. This is based on the research conducted by Ruhr-Universitat Bochum (RUB) biologists.

The researchers said that in about a decade, bacteria would have developed resistance against current antibiotics, rendering them ineffective and useless. But according to their study on M196 peptides, which was chosen as the representative of very small peptides that are made of four to as many as 10 amino acids, these peptides were found to be efficient in eliminating bacteria. They are especially effective against multi-resistant pathogens that trigger sepsis.

Earlier studies have proven this, but the group was focused on finding out just how the peptides are able to do it. Only then will this potential antibiotic has a shot at being approved as a new drug, like how it is with other new substances developed to treat certain diseases.

The study finally showed that the peptides attach themselves to the bacterial cell membrane. In the process, they delocalize the proteins in the cell membrane that are necessary for the bacteria’s vital processes. As a result, the cell wall biosynthesis are disturbed, destabilizing the bacteria’s physical aspect, and the cell respiration is prevented, which reduces the production of ATP. This consequently leads to cellular energy deficiency, which prevents bacterial growth. That’s why these small peptides are now considered as the perfect replacement of the current antibiotics.

Seeing how the M196 peptides attack bacteria in two specific fronts, it reduces the possibility of the bacteria developing resistance against peptides. This is also why they work against multi-resistant bacteria.

This could be the start of more drug discoveries that kill bacteria while protecting human cells. The effect of the M196 on the cell membrane was in part influenced by the fatty acids in the membrane. The presence of fatty acids and other components in the bacterial and human cells differs and so it is between bacteria from different classes.

To learn more about peptides as antibiotics follow the links below.