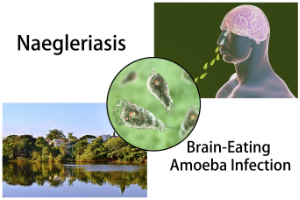 You might think that something as scary as a brain-eating amoeba could only be found in a science fiction movie, but it’s not – it’s actually a real thing. So real in fact, that it’s recently stirred up some news around the country. In Florida, a 13-year-old boy was hospitalized and ultimately died after vacation in a freshwater source around North Florida. And several cities in Texas were issued an emergency alert after a young boy was hospitalized after playing in a public fountain and using a hose in his front yard.

While this sounds like something that could keep you awake all night or leave you with never wanting to swim in a lake again, you’ll be glad to know that these situations are typically very rare. But it does raise some questions, such as what are my chances of contracting this infection? How severe can the infection become? Are there ways to prevent it?

Unfortunately, not much is known about this brain-eating amoeba other than it exists and it can cause a life-threatening infection. But before we get into the details of the deadly infection it can cause, let’s get down to the details about these little organisms.

Known as Naegleria fowleri, this amoeba is a single-celled living organism that can cause an infection in people if given the opportunity to go up a person’s nose and attach to the brain. It’s most commonly found in the soil and in warm freshwater sources, where people like to spend a hot summer day such as lakes, rivers and springs.

The infection comes when people go swimming and diving in these warm, freshwater places then the amoeba travels up the nose and to the brain where it eventually destroys the brain tissue. Fortunately, you can’t get infected from drinking water contaminated with the amoeba. However, if the contaminated water somehow makes it way up through your nose, for instance during a nasal cleanse, there is a chance you can become infected.

Found all around the world, this particular amoeba usually makes its home in freshwater locations in the more southern, warmer areas. In the United States, this would be in the southern states. Due to its heat-loving condition, it can be found in lakes, rivers, geothermal water, warm water discharge from industrial plants, geothermal drinking water sources, poorly maintained swimming pools, water heaters, and in the soil. Luckily, for beach-goers, Naegleria fowleri is not found in salt water, like the ocean. And, if you properly chlorinate and maintain your swimming pool, it typically won’t be found in there as well.

What is an amoeba?

Before we get too far-gone with Naegleria fowleri and the infection it can cause, we’re going to break down the basic science of what an amoeba is and how it can cause such a horrific infection in humans.

All living things can be divided into two groups based on the complexity of their cell structure – prokaryotes and eukaryotes. Bacteria and Archaea are prokaryotes, while other living organisms have highly organized cell structures and are eukaryotes.

Although amoebas are simple organisms, biologically speaking, they can often cause infections in humans, such as the disease primary amebic meningoencephalitis (PAM). This disease causes a brain infection that leads to the destruction of brain tissue, which is often fatal. Early symptoms include fever and vomiting, which progress to more severe symptoms such as hallucinations and coma, and can ultimately lead to death within about five days. Luckily, it is not contagious and cannot be spread from person-to-person.

Even though the infection is rare, it can still happen. So, if you happened to be vacationing somewhere and this amoeba swims up your nose and causes a rare infection, is there a way to survive?

According to the CDC, the fatality rate is over 97 percent. There have been 148 cases in the United States from 1962 to 2019 and only 4 people have survived. Effective treatment for the infection hasn’t been proven since almost all cases have been fatal. However, more recently, there have been a few cases where people were treated with enough medication that reduced the swelling in the brain.

This brain-eating amoeba is so tiny that you can’t see it with the naked eye, which can make the average person extremely paranoid about taking a quick dip in your favorite lake or river during the warm months. And although this is a life- threatening situation, infection with Naegleria fowleri is very rare. With that being said, the CDC recommends that you should seek medical care immediately whenever or if ever you develop a sudden onset of fever, headache, stiff neck and vomiting, particularly if you have been in warm freshwater recently.

The CDC also warns that whenever you go swimming or partake in recreational activities in or around freshwater, there will always be a low-level risk of infection. It can take many days or weeks to identify the amoeba in the freshwater source. And because of this, you can safely assume that there’s a low-level risk you’re taking by swimming in any warm freshwater sources, especially during the warmer months and in the southern states.

In fact, the CDC believes that posting signs based on finding the amoeba in the water is an unlikely way to prevent infections because:

There are not many ways to reduce your chances of getting infected by the brain-eating amoeba, except to focus on limiting the amount of water going up the nose and lowering the chances, if possible, that Naegleria fowleri may be in the water. While swimming, you could hold your nose shut or use nose clips, avoid putting your head under the water or avoid warm freshwater when the water temperature is high and the water level is low.

But unfortunately, there is no other prevention to coming into contact with this deadly amoeba except being knowledgeable about its existence in order to catch the symptoms early on. By seeking medical help from a professional in the earliest days of encounter with this infection, there could be a way to help save a life. And again, to help ease your mind, the infection is very rare. Millions of people swim in fresh bodies of water every day, and only a handful of cases have been found. In fact, the rates of people dying from drowning far surpass those of dying from this particular infection.

So, while it’s good to be cautious and know that there are things in the water that could be detrimental to your health, it’s better not to stress about it. Instead, just try to relax and enjoy those family vacations while you can.