Enjoying the Summer Season? Mosquitoes are too! - NY Requirements Blog

Enjoying the Summer Season? Mosquitoes are too!
Posted by Emily Pazel 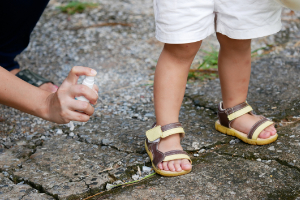 Humans aren’t the only ones enjoying the long, hot summer days. Around this time of the year, mosquitoes are in full bloom – breeding, flying around and spreading deadly diseases around the world.

Although mosquitoes are relatively small insects, they are one of the most deadliest animals on the plant, according to the World Health Organization (WHO). Every year, they carry and manage to spread diseases to humans, causing millions of deaths around the world. In 2015, WHO stated that an estimated 438,000 people died from malaria alone, and that more life-threatening diseases such as Zika, West Nile virus, yellow fever, dengue, and others, are making their way across the world with a little help from the mosquito – no doubt.

By now, if you’re like me, you might start to feel your skin crawl just thinking about mosquitoes. Maybe even feel a little more… itchy? But don’t worry – we’re not just here to talk about all the deadly diseases you could potentially contract this summer, as we’ll also talk about some helpful tips and preventative measures to keep you safe.

But before we get into the part about safety, let’s dive into all the different diseases and viruses that mosquitoes can carry.

As you may already know, mosquito-borne diseases or illnesses are caused by bacteria, viruses or parasites that are transmitted to humans when they are bitten by a mosquito. But did you know that mosquitoes can transmit the disease without being affected themselves?

Here are a few different types of mosquito-borne diseases that are most commonly known throughout the world:

Malaria is an ancient disease that has been around for centuries. This mosquito-borne disease is caused by a parasite and is transmitted to humans by the female Anopheles mosquito, according to the American Mosquito Control Association.

If someone contracts the disease, they will often experience fever, chills, and flu-like symptoms. However, if left untreated, malaria could cause someone to develop severe complications and die. Every year, scientists estimate that nearly one million deaths throughout the world are Malaria-related.

Although the Zika Virus has only been in the United States within the last few years, the virus was first discovered in 1947 in monkeys located in the Zika Forest region of Uganda. In 2007, the first recorded outbreak of the virus was reported on a little island in the Pacific. However, in 2015, Brazil reported a large outbreak of the virus and it was then linked to be associated with microcephaly, which is a congenital defect of the cranium and brain size in newborns that provide nothing but complications and most likely end in fatality.

When infected by this virus, the illness that comes with it is typically mild. The part of the virus that isn’t so great is the microcephaly part. Therefore, the most at-risk people involved are pregnant women and children.

While traveling in an area more susceptible to mosquitoes carrying the Zika virus, it’s recommended to stay in hotels and building with air conditioning and window and door screens to help keep the mosquitos at bay.

According to the Centers of Disease and Control and Prevention (CDC), the West Nile virus is the “leading cause of mosquito-borne disease in the continental United States.” The virus was discovered in Uganda in 1937 and was first detected in North America in 1999.

Typically, people who become infected with WNV do not become sick. But for those that do, there’s roughly a 1 in 5 chance for people to develop a fever. And the CDC warns that about 1 out of 150 infected people can develop serious, sometimes fatal, symptoms that will require medical attention.

Although Yellow Fever has been spotted in different parts around the world, it currently stays close to the tropical areas of Africa and the Americas. The disease has a few symptoms that include fever, headache, jaundice (this is where the “yellow” term comes from), muscle pain, nausea, vomiting and fatigue.

A Yellow Fever vaccine was eventually developed to help combat the disease, according to WHO. “A single dose of yellow fever vaccine is sufficient to confer sustained immunity and life-long protection against yellow fever disease,” they stated.

Several countries throughout Africa and Central and South America is where you would primarily find mosquitoes carrying this disease. In 2013 alone, there was as many as 60,000 deaths in Africa due to Yellow Fever.

Interestingly, the Dengue virus is spread through the same female mosquito species that also transmits chikungunya, yellow fever and the Zika virus. The first severe dengue disease was recognized in the 1950s during an epidemic in the Philippines and Thailand, according to WHO.

Today, it has spread through most of Asia and Latin American countries and has become the leading case of hospitalization and death among children and adults in these regions. When infected by the disease, you may suffer from flu-like symptoms. However, if it becomes severe enough, it could become life-threatening and you should seek immediate medical attention.

By now, you’re probably noticing a vicious cycle of: a) mosquito contracts a disease, then b) transmits deadly disease to humans via bite, and then c) human becomes infected and ultimately overcomes the disease or possibly dies.

However, it should be noted that not all mosquitoes carry deadly diseases or illnesses, and oddly enough, only female mosquitoes can actually bite and spread disease. But that doesn’t mean that you shouldn’t take precautions and preventive steps to ensure that you and your family can make the most out of your summer days.

Unless you live in Antarctica, there’s a possibility that you’ll encounter some pesky mosquitoes every now and again. So, while you’re enjoying summer and watching your children play, here’s a few tips to keep the mosquitoes at bay:

The Environmental Protection Agency (EPA) maintains a registered list of insect repellents that are proven to be safe and effective for people to use. When searching for an insect repellent to use, make sure that it has one of the following active ingredients: DEET, Picaridin, IR3535, Oil of lemon eucalyptus (OLE), Para-menthane-diol (PMD), or 2-undecanone.

When using insect repellent on children, the CDC suggests:

The CDC and EPA warn against using repellents that are not registered with the EPA, such as natural repellents, because the effectiveness of the product is unknown and might not be suitable protection against mosquitoes.

As friendly as humans are, we don’t want uninvited guests in our homes – including mosquitoes! In order to keep the mosquitoes out, take precautions such as installing screens on your windows and doors. And remember to repair any holes that may become big enough for mosquitoes to eventually sneak in through.

It’s also good to know that mosquitoes enjoy laying eggs in or near stagnant water. This can include anything from a large lake to as little as an inch of standing water in a flower pot on your back porch. The CDC suggests that once a week, you should empty and scrub, turn over, cover, or throw out items that hold water, such as tires, buckets, planters, toys, pools, birdbaths, or trash containers.

Just as it’s important to know how to control mosquitoes in and around your home, it’s also important to know how to deal with mosquitoes while you’re traveling. If you’re traveling overseas to an area known to have favorable-mosquito conditions, you should try to stay in a hotel or building with air conditioning and/or screens on the windows and doors. If for some reason you find yourself sleeping outdoors or in a room without screens, sleep under a mosquito net, which you can purchase at your local outdoor store or online before traveling.

While you’re enjoying the summer days this year, remember, you’re not alone. With over 3,000 different species of mosquitoes thriving throughout the world, you’re bound to run into them eventually. And when you do, it’s best to take preventative steps, such as wearing bug spray, to keep yourself and your family safe during the summer season.