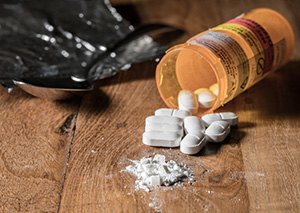 Chances are you or someone you know has been prescribed opioids. Opioids are any number of substances, legal or otherwise, used to alleviate moderate to severe pain. If you’ve ever incurred a serious injury or are recovering from surgery, your doctor more than likely handed you a prescription for this medicine with a specific set of guidelines on when and how to take them.

When used properly, opioids are an effective and generally safe method for short-term management of more serious types of pain—they reduce suffering and invoke a level of sedation to help patients keep their minds off the pain.

Recently, though, opioids have become much more accessible to patients, and it has been found that long-term use can have some dangerously dire repercussions, including addiction, overdose, and death. In fact, as of 2016, it has been found that half of Americans know someone who is addicted to opioids. And that’s just prescription painkillers; outside of the doctor’s office, opioids take other illegal forms and have caused a significant uptick in the number of opioid-related issues.

The medicinal use of opioids in the United States has a long and complicated history. They’ve enjoyed social acceptance, suffered social stigma, and fallen everywhere in between. In their legal form, opioids have gone in and out of use over the years. Now they’re under heavier scrutiny than ever before, even being named a serious public health issue by the Department of Health and Human Services. The jig is up on opioids—they pose a monumental threat to millions of Americans. So the question remains: Why are these substances still legal and what can be done to rid our society of their abuse?

Increased Drug Deaths as a Result of Opioids

While it wasn’t always thought so, opioids are incredibly addictive substances. The relief from pain combined with the euphoric sensations opioids elicit can cause a person to quickly develop a physical dependency on the drug. And whenever their prescription runs out, addicted persons can quickly turn to illegal means to obtain the relief they desire.

Dangers Beyond the Prescription

While nearly 200,000 people have died from prescription-related opioid overdoses since 2000, it’s what’s happening outside of the doctor’s office that is the true killer. In June, the New York Times published a report concerning the rising rate of drug-related deaths in the US. They found that 2016 had the highest number of drug-related deaths—as many as 59,000—ever recorded, which is an astounding 19 percent increase from 2015. They attributed this staggering rise in deaths to the influx of illicit opioids such as heroin and fentanyl. And STAT has found that if things continue the way they are going, we could see a drug death toll as high as 650,000 in the next decade.

Most concerning is that a large segment of heroin and fentanyl addicts were once legally prescribed opioid users. As such, the prescription opioid epidemic is still very much to blame and is a systemic issue in our society today.

Early Opioid Use in America

During the Civil War, soldiers were given the opioid morphine in order to deal with the tremendous pain of battle wounds. A few decades later, in 1898, pharmaceutical giant Bayer Co. started production of heroin on a commercial scale. Following the first few clinical trials on the effectiveness of heroin as a medicine, researchers were heralding it a “wonder drug” for its therapeutic qualities.

However, after years of observation of the long-term effects of the substance, it was found that heroin and other opioids were highly addictive. As a result, by 1920, doctors were avoiding the use of heroin as much as possible, and with the Heroin Act of 1924, the use of heroin had been abolished entirely.

For over 50 years, the use of heroin and other highly addictive opioids was almost completely absent from common medical practice. That is, until the mid-1970s when opioid brands such as Percocet and Vicodin came onto the market. In 1980, a very influential letter was written to counter the ill effects of opioids. The 100-word letter, written by Dr. Hershel Jick, documented nearly 12,000 patients who were treated with narcotics. Jick wrote that "the development of addiction is rare in medical patients with no history of addiction." Many supporting reports followed Jick’s proposal, but his letter is now seen as the stepping stone that brought commercial opioids into regular medical practice. Following Jick’s letter, more and more doctors began prescribing opioids to their patients.

In 1994, Purdue Pharma began testing a new opioid called OxyContin as a long-term pain killer. It went on the market in 1996. The same year, the number of written opioid prescriptions jumped from about 3 million to 8 million each year. Between then and 2014, the number of opioid prescriptions nearly quadrupled. While this drastic spike in opioid sales was due in part to the health of the patients, critics have decried it as a ploy to turn a profit off of the population’s addiction to the substance.

Opioids as a Business

Today, Jick regrets the role his letter played in the surge of opioid abuse. However, the role was entirely unintended. Jick and his coauthors “found more than 600 citations of the letter, a majority of which failed to note that the patients whom Jick and Porter described were in hospitals for brief stays when prescribed opioids.” The majority of these citations were by drug companies trying to prove that their products weren’t addictive, which wasn’t at all the conclusion Jick had reached.

Although they are now known as false and misleading, the aforementioned reports released in the 1980s and 1990s helped beckon doctors slowly into including opioids into their pain management regimes. And it didn’t take long for pharmacy companies like Purdue Pharma and Johnson & Johnson to catch on. These companies, among others, began aggressively marketing their drugs to doctors through ad placements in respected medical publications; they also plugged their products into continued medical education. They even created nonprofits like The American Academy for Pain Management and the American Pain Society, which advocated for the expanded use of pain narcotics in treatment.

Purdue Pharma even created a direct-to-consumer marketing strategy to entice patients in pain. The company released a video in 1998 called “I Got My Life Back,” which chronicled six people’s journeys through addiction recovery. The video was meant to be played in hospital waiting rooms. A doctor in the video champions the drug, saying there are no serious side effects, the danger of addiction is almost nonexistent, and that they “should be used much more often for patients that are in pain.”

Shortly after this increased effort in opioid marketing, the Joint Commission—which is responsible for accrediting health institutions—issued a new standard for pain management. The commission advocated that assessing pain should be a top priority for doctors, and failing to do so could result in penalization. A report from the US Accountability Office even found that Purdue Pharma funded a “pain management education program” through the Joint Commission, and was given permission to disseminate educational materials on pain management.

Government officials finally figured out what was going on, and all the unsubstantiated marketing information caught up with the pharmacy company. In 2007, Purdue Pharma and three top executives pleaded guilty to charges of misleading regulators, doctors, and patients about the dangers of opioid abuse. This lawsuit marked a turning point in the public’s perception of opioids and sparked revolutionary change in the regulation of opioid sales, prescriptions, and use.

With the con of the opioid industry being brought to light in recent years, our perceptions have changed. In fact, since 2010, the number of dispensed opioid prescriptions has decreased a little each year. However, that is no reason to get complacent.

Opioid abuse is a systemic issue. The entire foundation of the medical industry has to be changed, and reformation of this caliber is achieved only through unified efforts across medical legislative, social, and educational grounds. That is not to say that we should abolish the use of opioids entirely. Rather, we need to regulate use to diminish the chance of abuse and inform the public about the dangers of opioid addiction.

Fortunately, the past few years have seen great strides in making this goal possible. In 2016, the Drug Enforcement Administration announced plans to reduce the number of every schedule II opioid manufactured in the US by 25 percent or more. In a press release, the DEA said, “The purpose of quotas are to provide for the adequate and uninterrupted supply for legitimate medical need of the types of schedule I and II controlled substances that have a potential for abuse, while limiting the amounts available to prevent diversion.”

This comes just months after the Center for Disease Control released a new set of guidelines for physicians regarding opioid prescriptions. The new guidelines encourage doctors to seek alternative pain treatment regimens before turning to opioids. The CDC hopes to help doctors provide healthier, more effective pain relief while also deterring the chance of opioid abuse.

Additionally, the Food and Drug Administration announced last year that they plan to require all immediate-release drugs, including immediate-release opioids, to carry a “black box” warning on the label. The black box warning is the strongest warning the FDA can administer, and it’s used to encourage doctor-patient conversations about the dangers of prescription opioids.

The opioid epidemic has brought about immense turmoil in the past few decades. Just as Dr. Jick now regrets ever publishing his letter, the larger medical community is working together to recognize and solve systemic problems. While we can’t turn back the damage that has come from opioid abuse, we can certainly learn from it.