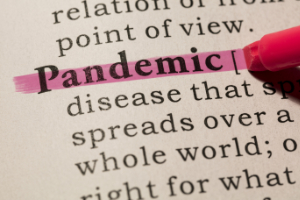 When the most recent pandemic began, roughly two years ago, it came as a pretty big shock to some as the world began to change. It seemed as though a Hollywood movie had become reality as the world was asked to change their way of life to get through a global pandemic. Many were asked to stay home, others were deemed “essential workers” and continued to work in person. Most classrooms and schools became a virtual learning center, and everyone was asked to “socially distance”, in an attempt to help slow the spread of the virus.

If you fast forward a few years to the present time, things are better than they were during the height of the pandemic, but we are not fully back to how things used to be. And, it’s believed that things may never get back to normal for a while, especially if you work in the healthcare industry where masks and other precautions are most likely to become the new norm. As things get back to normal, however, it’s interesting to see how the pandemic has shaped our way of life and how some things may never go back to the way it was before.

Although it seems like we have lived through some of the worst times, it has not been one of the first times the world has seen a pandemic. However, with the advancement in today’s modern world and global transportation, it has made it more difficult to keep viruses and illnesses at bay. So, what did past pandemics look like? Were they tougher to fight without modern medicine? And in what ways did we learn from them?

Pandemics of the Past

As soon as an epidemic or an outbreak of an illness or disease crosses a country’s boundaries, by definition, it becomes a pandemic. And, according to history.com, “Communicable diseases existed during humankind’s hunter-gatherer days, but the shift to agrarian life 10,000 years ago created communities that made epidemics more possible.” Some of those first epidemics included malaria, tuberculosis, leprosy, influenza, smallpox and others.

As history.com recalls, the more civilized humans became the more likely pandemics were to happen, especially when you consider how fast cities were built, how trading goods became a part of the world and as countries have gone to war with one another. Here is glimpse of some of the past pandemics:

Although this pandemic list is large, it is not all of them. And, history is likely to repeat itself in the future with more to come. However, with every pandemic that has hit and affected people, more knowledge, research and ways of getting through them or helping prevent them have surfaced. In fact, when SARS hit in 2003, global health professionals took it as a wake up call to improve outbreak responses and lessons were used to keep diseases like H1N1, Ebola and Zika under control.

So while we continue to dredge through this ongoing pandemic, it’s good to know that health professionals are learning all that they can about how viruses spread, how they infect people and ways to prevent it or help those who get sick. As we continue through this pandemic, it will help us in the future to be better prepared for more diseases and illnesses that will come.