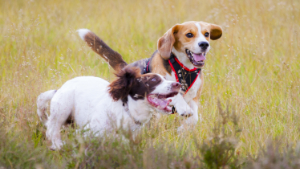 Although there has been a lot of information gathered and shared about humans passing diseases and viruses around, you don’t often hear about animals spreading them. Because we can’t directly communicate with animals, it’s hard to know what is harming them or even when they are sick. However, it does happen – probably more often than you think. There are instances where diseases are spread from animal to animal and then also from animal to human and vice versa.

So, how does this work exactly? Pets can be very beneficial to humans on many levels, both physically and mentally. It’s more common than ever these days to see a home with one or more pets in it, and it’s good to know what to look for if your pet may be showing symptoms of carrying a virus or if it’s possible to spread the virus to them.

How to Tell If Your Dog is Sick

Although your dog can technically get sick, according to wagwalking.com, it’s fairly rare to give your dog a respiratory infection or for the dog to give it to you. However, it can still happen. If you are concerned that your dog might be sick, it’s best to take them to the vet and see what’s going on.

Symptoms of respiratory infection in your dog can include:

When respiratory infections happen in dogs, they can be similar to what happens in cats, other animals, and even people. Per wagwalking.com, the commonalities include: being caused by contagious viruses or bacteria, they are most commonly acquired from another animal of the same species, they can (although rare) be caused by the same zoonotic organism, they can have similar symptoms and treatments can be similar.

When harmful germs and viruses are spread between animals and people, according to the Centers for Disease and Control (CDC), it’s known as zoonotic diseases. As people interact with animals on a daily basis, there is always a risk of contracting germs that can cause serious illnesses. Zoonotic diseases are caused by harmful germs like viruses, bacteria, parasites, and fungi, which can cause many different types of illnesses in people and animals.

“Zoonotic disease are very common, both in the United States and around the world,” writes the CDC. “Scientists estimate that more than 6 out of every 10 known infectious diseases in people can be spread from animals, and 3 out of every 4 new or emerging infectious diseases in people come from animals.” And due to this, the CDC works around the clock to learn more and try to protect people from these diseases.

How do these diseases spread? Here are a few different ways, per the CDC, that zoonotic diseases can spread:

Unfortunately, no one is safe from getting sick from a zoonotic disease if encountered – not even healthy individuals. However, some people can be more at risk and might want to take steps to protect themselves. Children younger than age 5, adults older than 65, people with weakened immune systems, and pregnant women are all part of that group where risk factors can be greater.

In dogs and cats, according to kidshealth.org, they can carry several infections that can harm humans, which include:

How to Reduce the Spread of Animal Diseases

Fortunately, modern medicine has come a long way in helping prevent deadly diseases from spreading too much and also helping when people do become infected. And there are a few tips and tricks to help your family safely care for pets to help prevent harmful germs from spreading.

After taking or choosing a family pet to call your own, take it to a veterinarian for vaccinations and an exam. Then, after the exam is complete and everything is taken care of, be sure to schedule regular checkups and routine vaccinations for your pet as recommended. Doing this will help keep your pets healthy and lowers the chance that they can spread an infection to your family.

Another way to help reduce the spread of germs is to teach your children to wash their hands after touching pets, handling your pet’s food, or cleaning out the pet’s cage, tank, or litter box. It can even be beneficial to wear gloves when cleaning up animal waste. And, remind your children to wash their hands after visiting petting zoos, farms, or friends houses where there are animals.

And, although we just love when our furry friends lick us, it could be beneficial to avoid kissing or touching your pet’s mouth because infections can spread through saliva. It’s also a good idea to keep pets out of areas where food is prepared or handled, and never adopt a wild animal as a pet. If you have pets around young children, be sure to be extra careful as they are more likely to catch infections from pets when they crawl around on the floor, share food with them or touch them and then put their fingers in their mouth.

So, although you don’t hear about dogs or cats or other animals getting humans sick very often, it can happen and it’s best to know what to look for and seek medical attention for the animal or even person if needed.