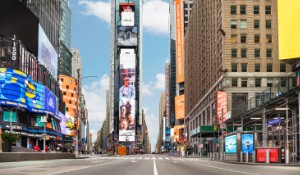 As the spread of the global pandemic continued to touch cities and hometowns all over the United States, busy streets went empty, restaurants went dark and the normal hustle and bustle of thriving cities, such as New York City, declined in a way that we never saw coming. If you live in the state of New York or anywhere near the city, you might have witnessed several changes in your town, including the collapse in the tourism industry, leaving thousands without jobs and many businesses, theaters, sightseeing tours, mass transportation services and other establishments hurting for prosperity and going back to a normal life.

With a hurting economy and social distancing guidelines established for safety precautions making it tough to get back to any kind of “normal” life, how does this affect the future of the industry going forward? Is there any hope of seeing large crowds gathering for a parade or celebration? What about all the daily sightseeing tours that bring in hundreds of people daily to see the state’s historic and iconic landmarks? How will theater productions, something that NYC is highly known for, be able to make profits when social distancing guidelines are limiting?

Many of the answers to these questions are left up in the air as decisions and guidelines are still being tested and processed to ensure everyone’s safety. However, we will discuss the facts of how hard the tourism industry has been hit in The Big Apple and what can be done as far as how to be out in public while also being mindful of your safety.

COVID-19 & its Affect on Tourism

As with many states around the country that rely on tourism dollars for much of the state’s economic growth, New York has been one of the top states that have been hit hardest by the spread of the pandemic. Now, it faces the dilemma of re-opening again, and how to mitigate the challenges of spreading the virus and keeping its citizens safe.

The tourism industry in New York brings in an estimated $70 billion annually, as well as supporting around 400,000 jobs. Between sightseeing tours around the city, the city’s iconic Broadway Shows, parades, concert halls, museums, retail and the hotels and restaurants, many are feeling the hit of the pandemic.

During the month of January and February, the city saw a five to six percent growth, which is usually its down time of the year. Then, once the pandemic hit the streets in March, the tourism rate dropped by 63 percent.  According to the Washington Post, The Port Authority, which oversees the city’s five airports, reported that traffic was down by 97 percent. World-renowned museum, the American Museum of Natural History, had to let go 20 percent of its staff, as well as projected their budget deficit between $80 million and $120 million over the next year. At the Empire State Building, which typically sees around 4 million visitors annually, is expecting to only see city residents for a majority of this year.

According to the Hotel Associations of New York City, since the beginning of March, New York City saw that hotel revenue was down around 80 percent and hotel occupancy was around 7 percent. Although the city is hoping to re-open businesses again and bring the city to life again, there is still much debate on what type of businesses will re-open and to what extent travelers will be allowed back into the city. As store owners and tour companies feel the effects from the loss of revenue, they look to other alternatives to make in come, such as doing private tours with families and small groups, adding plays and musicals to live streaming services and partaking in more overall retail options.

As the state of New York moves towards safely re-opening the state and its businesses again, the governor, along with local leaders, have created state social distancing guidelines to help ease the transition back into what we now call “normality” among a pandemic.

Earlier this year, New York, being one of the busiest and most populated areas of the country, saw one of the biggest and quickest spikes in COVID-19 cases when the virus first emerged in the United States. Due to the vast amounts of people taking the subways, buses and other mass transportation services, along with the high amount of tourism, the city had many infected by the virus and some even saw their coworker, friends and loved ones die from complications of the virus. The Hospital floors were packed full with COVID-19 patients, and many hospitals saw a critical shortage of ventilators, which ended up being lifesaving machines.

After the virus hit its peak, New York’s leadership came together to create and implement guidelines to help slow the spread of the virus and save lives. The state created a “10 Point Plan” as it started to move through phases of reopening and return back to a semi-normal way of living.

The plan, which was created by public health officials, determined that reopening the state would happen on a regional basis, as many areas varied by infection rates and the capacity to absorb a resurgence of potentially new cases. However, no matter what area you live in, the state ensured that everyone should be washing your hands as often as possible with soap and water, wearing a face covering while out in public and avoiding public gatherings and large groups.

Near the end of March, Governor Cuomo announced the “New York State on PAUSE” executive order, which includes a 10-point policy to assure uniform safety for everyone; the plan includes:

To make sure everyone is adhering to the social distancing guidelines, Governor Cuomo also announced along with the plan that violating the state’s social distancing protocol could amount in a $500 - $1,000 fine for individuals and businesses. On the state’s website, they also have a place where an individual can file a complaint against your employer or place of work, as well as filing a complaint about a business, location or incident in your community.

While everyone is still getting used to the new lifestyle that the COVID-19 pandemic has forced upon us, it’s tough to deal with the social isolation and economic downturn that has affected many lives. The hope is that one day soon, a vaccine will be created that will allow everyone to return back to work, back to vacationing in The Big Apple and returning to normal life. Until then, remember to follow the guidelines that have provided for your own safety, as well as for the safety of your coworkers, friends and loved ones.