It's Time to Take Another Look at Bacteriophage - NY Requirements Blog 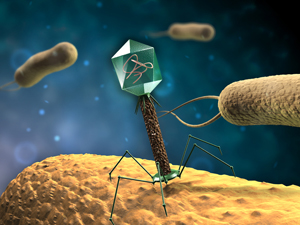 With the danger of uncontrollable bacterial infections increasing globally, a revitalized look at how bacteriophage can aid us in battling antibiotic-resistant infections is a promising alternative.

Bacteriophage , or “phage” for short is a virus that infects and replicates within bacteria. There are more phage on earth than bacteria and are considered the “ Deadliest being on Planet Earth ”. Although they are lethal, they are specialized to particular bacteria in which they kill.

Why should we explore the usage of phage?

“Each year in the US, about two million people become infected with resistant bacteria, and at least 23,000 of those die from their infections” as stated by Emily Mullin in her MIT Technology Review article in January of 2018.

When bacteria evolve, they become immune to almost everything. Bacteria that cannot be killed using multiple antibiotics have been coined, “Superbugs”. During research on phages, one amazing discovery was that phages evolve just like bacteria and therefore in order for bacteria to defend itself against phages, bacteria must give up its resistance to antibiotics.

Antibiotics kill almost everything, even the good bacteria. Whereas phages are very specific toward which bacteria they attack. Phages that are used to treat people, only attack their target bacteria and not human cells.

In a recent Dallas News article, Robert Schooley, a doctor who specializes in infectious diseases at the University of California, San Diego, stated “You are living in a sea of phages”. Phages already live on our skin, nasal passages and throughout our gastrointestinal tracts. They are one of the oldest life forms on the planet.

The practice of using phages to treat bacterial infections, known as phage therapy has been studied for almost a century. It was primarily discounted due to economics and the fact that antibiotics are cheaper to produce. But, with the increase of “Super Bugs”, phage therapy in conjunction with antibiotics that the “Superbugs” are immune to is a potentially viable alternative.

Currently, no phage therapy products have been approved for human use in the United States. Several commercial phage preparations are being used for biocontrol of bacterial pathogens and have been approved by the FDA under the classification of “generally considered as safe”. A few examples of how phage are already being utilized include; to fight Salmonella, Listeria Monocytogenes and E. Coli.

Where do we go from here?

The re-emergence of talk regarding phage therapy took a dramatic turn in late 2015. Tom Patterson, PhD contracted Acinetobacter baumannii, an antibiotic-resistant infection. Due to complications with the internal drain used to localize his infection, Tom experienced septic shock and went into a coma. With the aid of his wife, Steffanie Strathdee, PhD, who is an infectious disease epidemiologist and director of the UC San Diego Global Health Institute, Tom underwent “phage therapy”. An emergency approval was obtained from the Food and Drug Administration, and Tom was administered the phage therapy directly into his abdominal cavity via catheters. Tom emerged from his coma within three days of the start of the phage therapy, and made a full recovery.

With there being numerous versions of phage and numerous types of bacteria, one of the obstacles in streamlining the usage of phage therapy is in matching the correct phage to target bacteria. Phage are very specialized in their ability to fight bacteria, and not just any phage can kill just any bacteria. Thru the efforts of Jessica Sacher, a grad student experimenting on phages at the University of Georgia and her friend Jan Zheng, a tech consultant and developer, they created a Phage Directory to aid in locating perfectly matched phage to treat individual strands of antibiotic-resistant bacteria.

With modern advances, phage research has again gained traction. The increased attention, testing and implementation of modern technological improvements will encourage the exploration in phages and phage therapy. The battle with superbugs and overuse of antibiotics has resulted in an increase in our need to delve deeper in how bacteriophage can be beneficial.