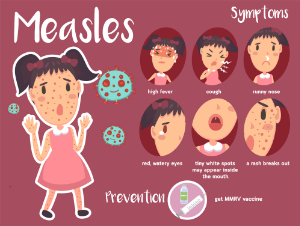 So, how did it return? According to the CDC, it could have been brought to the country from travelers who contracted the disease abroad and it could be further spread within communities where people remain unvaccinated. Therefore, it is important to understand the signs and symptoms associated to measles.

Measles, also known as rubeola, is a childhood infection that’s caused by a virus. It can be serious and even fatal for small children, so recognizing the signs and symptoms is crucial. Signs and symptoms of measles usually include:

It’s also important to note that symptoms of the disease may not appear until around 10 to 14 days after someone’s exposed to the virus. Below is the basic  timeline for someone who has contracted measles:

Measles is a highly contagious disease. Roughly 90 percent of people, if left unvaccinated, will become infected if they come into contact with someone carrying the virus. It spreads through the air when an infected person coughs or sneezes.

For some, measles brings far more complications than just a fever and a rash. Currently, there is no treatment and it can cause serious health complications, especially in young children. The most common complication of measles is an ear infection, which could potentially lead to permanent hearing loss if not treated right away.

The CDC defines an outbreak as an occurrence where three or more cases of a disease are found in a specific place or group of people. So far, the largest outbreak this year has been in New York City, with nearly 400 cases in a concentrated area in Brooklyn.

If you believe that someone in your household has contracted the virus, here are some precautions to protect your family and friends:

It’s important to note that if you’ve already had the measles, your body has built up an immune to fight the infection and you can’t contract the virus again. This is why most people that were born or living in the United States before 1957 are immune, because there’s a good chance that they’ve already encountered it and have become immune.

Measles became a nationally recognizable disease in the United States in 1912, and in the first decade of reporting the disease, an average of 6,000 measles-related deaths occured each year.

During the decade right before the vaccine was created and became available, nearly all children would contract the measles virus by the time they were 15 years old. Estimates show that around 3 to 4 million people in the United States were infected each year, and each year, among those reported cases, an estimated 400 to 500 people died.

In 1963, a man named John F. Enders and his colleagues were able to transform strains of the virus into a vaccine and licensed it in the United States. By 1968, five years later, an improved an even weaker measles vaccine developed by Maurice Hilleman was distributed.

The CDC was determined to eliminate the disease completely and set a goal for it to be eradicated from the United States by 1982. Although it fell short on its goal, it managed to drastically reduce disease rates, and by 1981, the number of reported cases were down by 80 percent compared with the previous year.

By the year 2000, the disease was declared eliminated from the country, even with many still being unvaccinated. This happened largely due to a highly effective vaccination program, as well as better measles control in the Western part of the world.

In other parts of the world, however, measles made their appearance again after a study that was published in 1998, and is now discredited, linked autism to the measles, mumps and rubella (MMR) vaccine. The rate of vaccinations in the United Kingdom dropped to an all-time low of about 80 percent of all children in 2003-2004. Later in 2008, there were nearly 1,400 lab-confirmed cases of measles throughout England and Wales.

With the current measles outbreak happening throughout the United States, it’s important to keep up with all your family’s immunizations to ensure they are better protected from contracting the disease.

If you or a loved one may have been exposed to the measles virus, you should not take the risk of fighting it alone and a call your doctor right away.