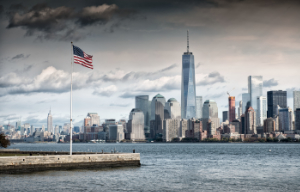 Where were you on that September day? That’s the saying people are most familiar with when talking about the tragedy that unfolded on September 11th, 2001. And if you lived in New York City or in the surrounding area during that time, there’s a good chance that your life has never been quite the same since.

When living in New York, even eighteen years later, the month of September has an eerie sadness that looms over the city. Every year, New Yorkers are reminded of the nearly 3,000 people who lost their lives tragically in a place where they call home. During this month of remembrance, everyone across the country pays respect to the victims and their families, but it’s tough to look at New York City the same, especially when it left a radically altered skyline in the country’s biggest city.

What do you remember most about that day? Maybe it’s the never-ending sounds of sirens that went up and down the streets, or how the sky seemed empty without the usual continuous planes flying above. Whatever the case, the traumatic events that unfolded over the next few days would go down in history as the biggest terrorist attacks this country has ever seen.

However, what people didn’t see coming was how an event such as this would bring the country closer and more united together than ever. Ground Zero, which is where the iconic Twin Towers once stood, became a centralized symbol of Americans coming together during a tragic time and embracing each other despite their differences. But what made the original World Trade Center a target to foreign attacks? Let’s dive into a quick history behind triumphant towers.

The original, iconic twin towers of Manhattan’s World Trade Center were nothing short of an amazing accomplishment. Each tower stood at 110 stories high and had around 50,000 workers and some 200,000 daily visitors, making it one of New York City’s busiest and most thriving places to be.

Although the towers weren’t completed until 1973, the conception of the idea was created in 1939 at an exhibit at the New York World’s Fair, which detailed a concept of a World Trade Center that would create “world peace through trade.” Though the idea was tossed out the window for a brief period of time, David Rockefeller brought the initiative back life again after proposing a plan to revitalize lower Manhattan.

After getting a vested interest from the Port of New York Authority, who was already revitalizing much of the city at the time, the two towers were completed in the early 1970’s. After completion, the World Trade Center Towers briefly became the tallest buildings in the world, standing at 1,360 feet. It was truly an incredible feat to witness at the time, and the two buildings became an iconic site in the New York skyline.

Over the next few years, the World Trade Center produced massive revenue and became a popular destination. It wasn’t until September 11th, 2001 when everything would change. In fact, the entire country would change.

For those that happened to be in New York or around the area at the time, this was the day that changed everything.

Even eighteen years later, it’s tough to even begin to grasp the concept of how much the country changed that day, how many lives were lost, and how that day still affects many people around the country today.

Here’s a snapshot of that day’s events:

Between the time from the first attack to the collapse of both towers, only 102 minutes had passed.

Over the next few days following the horrible attacks, the entire country was in shock. In most schools throughout the country, children were sent home early, and everyone mourned the loss of the nearly 3,000 people who died that day.

Our President at the time, George W. Bush, went on national television to address the country regarding the events that had unfolded earlier in the day. As millions tuned into watch and listen, here’s a little excerpt of what they would hear:

Today, our fellow citizens, our way of life, our very freedom came under attack in a series of deliberate and deadly terrorist acts. The victims were in airplanes or in their offices: secretaries, businessmen and women, military and federal workers, moms and dads, friends and neighbors. Thousands of lives were suddenly ended by evil, despicable acts of terror. The pictures of airplanes flying into buildings, fires burning, huge – huge structures collapsing have filled us with disbelief, terrible sadness, and a quiet, unyielding anger. These acts of mass murder were intended to frighten our nation into chaos and retreat. But they have failed. Our country is strong."

"A great people has been moved to defend a great nation…”

President Bush then ends his speech by saying:

“This is a day when all Americans from every walk of life unite in our resolve for justice and peace. America has stood down enemies before, and we will do so this time. None of us will ever forget this day, yet we go forward to defend freedom and all that is good and just in our world."

As a nation, it was time to rebuild. In fact, it was time to show everyone how people would come together more united than ever. And with that being said, the One World Trade Center, also known as “The Freedom Tower” was built.

One World Trade Center, AKA “The Freedom Tower”

The next few years following the attacks were scary, yet simultaneously, also inspiring. The economy was rather shaky with a possible war on the horizon, and many Americans were unsure what the future held. Luckily, there were also some inspiring stories of bravery and heroism that emerged from all the debris, and a monumental change happened right in New York City: The One World Trade Center was built.

The One World Trade Center, also known as “The Freedom Tower,” is a symbolic 1,776-feet-tall building that tops the charts as the tallest building in the United States and in the Western Hemisphere. It was finally opened in 2014, nearly a decade after its conception. The new building is 104 stories tall and has three million square feet of office space, with the One World Observatory that sits at the very top.

Within the 16-acre World Trade Center site, there’s also a National 9/11 Memorial that includes two reflecting pools in the footprints of the former Twin Towers, which is surrounded by bronze panels with the names of all those who died in the terrible attacks.

How 9/11 Still Affects Us Today

After the attacks on 9/11, life in America – especially in New York City – has changed, and it continues to change every day.

Today, you can’t even go to a football game or your favorite concert without first going through some type of metal detector and security gate. Not to mention, you and your personal belongings are even more thoroughly checked at the airport prior to boarding your plane.

Although these safety measures have been put into place, many still suffer from anxiety or PTSD from the 9/11 attacks, especially if you were in close proximity or directly affected by them. Another thing that’s come to light more recently is all the hazardous health problems that are impacting first-responders who were there at Ground Zero, cleaning and sorting through all the debris for countless days.

So, whether it’s indirectly or directly, the eleventh day of September 2001 has impacted everyone’s life in some way or another. It’s brought tears of sadness and tales of bravery, and most importantly, it made us closer together as a country, united in freedom.