Ringing in the New Year with COVID-19 - NY Requirements Blog 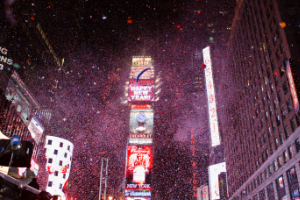 When the Coronavirus first made its way across the United States near the beginning of 2020, New York City and the surrounding areas were one of the hardest-hit places with positive cases and deaths. Now, with the holiday season in full swing, the governor announced near the middle of December that there were a new record high number of COVID-19 tests reported.

Although the vaccine has made tremendous leaps and bounds on being created and released quickly, it still may take awhile before everyone is properly vaccinated. And with that, some holiday traditions – such as the iconic New Year’s Eve Ball Drop in New York City’s Times Square – will have to take place virtually. Back in September, event organizers released a video and announcement saying the holiday event would happen “visually, virtually and safely.” The organizers also included that they would make sure anyone could tune in to easily watch it. Not only will major news networks carry live coverage of the event, but you could also watch it live from your phone or computer on the Ball Drop’s office site, Times Square Ball, or by tuning in on social media platforms.

While many will most likely be watching from home this year, you can still ring in the new year with commercial-free coverage of the Ball Drop and events leading up to it, such as the lighting and raising of the ball earlier that evening. Special live musical performances and hourly countdowns are also on the agenda for ringing in the New Year.

“We will miss everyone this year, but we will bring our celebration to you, whether you want to turn off and turn away from the bad news of 2020, or turn to the new year with a sense of hope, renewal and resolution, you’ll be able to join us virtually like never before as part of the Times Square 2021 celebrations,” said Jeff Strauss, one of the top organizers of the event.

Since near the beginning of the twentieth century, people have been celebrating the annual tradition of New Year’s Eve in Times Square. However, it wasn’t until 1907 when the first official Ball Drop began. The first New Year’s Eve Ball was made of iron and wood, along with one hundred 15-watt light bulbs. Although it was only five feet in diameter, it weighed 700 pounds, and was built by a young immigrant metalworker named Jacob Starr whose company was responsible for lowering the Ball for nearly most of the twentieth century.

But where exactly did the notion of a ball “dropping” originate? The first ever “time-ball” was installed at England’s Royal Observatory in Greenwich in 1833. The ball “dropping” was a way to signal the passage of time and would drop at one o’clock each afternoon. This would allow the captains of nearby ships to precisely set their chronometers, which is a navigational instrument. After the success of the time ball in Greenwich, many others were installed, including one that happens at the United States Naval Observatory in Washington DC, and of course, once a year in Times Square.

After the original New Year’s Eve Ball was created near the beginning of the twentieth century for Times Square, there have been seven versions of the Ball created for the annual celebration. And every year since, the ball has been lowered to signal the New Year, except with two years – 1942 and 1943 – where the ceremony was canceled due to wartime precautions.

The next Ball that made its grand appearance in the year 1920 was a 400-pound, wrought iron piece, which was replaced in 1955 by an aluminum Ball that only weighed around 150 pounds. The aluminum Ball stuck around until the 1980s when red light bulbs and the addition of a green stem converted the Ball into an apple for the famous “I Love New York” marketing campaign. After seven years, the traditional glowing white Ball with white light bulbs returned. By 1995, the Ball was upgraded with aluminum skin, rhinestones, strobes and computer controls, but was retired by 1998.

To ring in the new millennium, Times Square’s New Year’s Eve Ball was completely redesigned by Waterford Crystal and Phillips Lighting for the year 2000. The new Ball combined the latest in light technology mixed with traditional materials, which was to symbolize the past looking into the new millennium. In 2007, the same company built a Ball to celebrate the 100th anniversary of the Times Square Ball Drop tradition, which used LED lighting technology to dramatically increase the brightness and color capabilities of the Ball.

The Centennial Ball inspired the building owners of One Time Square to build the permanent Big Ball that’s now a year-round attraction above Time Square for everyone to admire. The Big Ball is nearly six tons and twelve feet in diameter, and uses 32,256 Philips Luxeon LEDs to illuminate 2,688 Waterford Crystal triangles.

Celebrating in Times Square with the annual Ball Drop has always brought large crowds of people together – thousands cheering for all the hopes and dreams the New Year will bring. This year, however, will be a bit different. As COVID-19 begins to invade the city of New York yet again, people have been recommended to stay home and limit their exposure to others. In recent days, restaurants in New York City have been banned for a few weeks to host indoor dining as a response to a rise in cases across the city and state.

“COVID cases are continuing to climb nationwide and with the holiday season in full swing, it could get worse before it gets better,” Governor Cuomo said in a press release. “The federal government must do its job and provide resources to state and local governments to equitably administer the vaccine and provide badly needed support for businesses and the unemployed. In the meantime, we are laser focused on ensuring the increase in cases we are seeing does not overwhelm our hospital system and we are putting in place redundancies to shore them up. Ultimately, it’s up to each of us to slow the spread of this virus until there is widespread access to a vaccine: wear a mask, socially distance, wash your hands and stay vigilant.”

So, how will you be spending your New Year’s Eve this year? Although many will be disappointed not seeing a large crowd gathered together to see the Ball Drop, that doesn’t mean there won’t be a celebration. After all, who doesn’t look forward to this year ending? This unforgiving year has come to an end, and there’s much to look forward to in the New Year. With vaccines on the verge of being dispersed, we have much to look forward to in the year 2021. And who knows, after all the doom and gloom we’ve lived through in this past year, it might be your best year yet. /p>