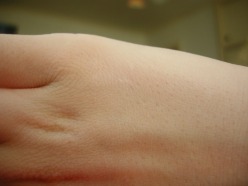 “It’s an invisible layer that can provide a barrier, provide cosmetic improvement, and potentially deliver a drug locally to the area that’s being treated. Those three things together could really make it ideal for use in humans,” study author Daniel Anderson said.

The development of the product has spanned a decade, with over 100 possible polymers that were created before making one flexible and compatible enough to mimic real skin. What gives the product its power is the cross-linked polymer layer, or XPL.

Scientists conducted multiple studies to test the XPL’s safety and effectiveness. In one study, they found the material helped tighten under-eye bags for 24 hours, and in another, they found the material helped prevent water loss from skin better than high-end commercial moisturizer 24 hours after application. None of the study participants reported irritation from wearing the XPL.

“I think it has great potential for both cosmetic and noncosmetic applications, especially if you could incorporate antimicrobial agents or medications,” Thahn Nga Tran, a dermatologist and instructor at Harvard Medical School, who was not involved in the research, said in the release.