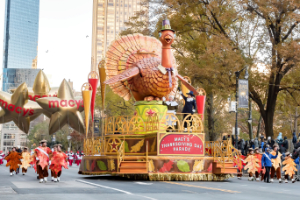 Spending a few days in the Big Apple around the Thanksgiving holiday is nothing short of magical. With the seasons changing and the holiday season traditions picking up in full swing, it’s a wonderful time to visit or be near New York City, where people come in countless droves all looking for the same thing: the spirit of the holiday season.

If you live in or around the city, you can certainly attest for all the fun, holiday traditions the city brings to life every year. In this blog, we’re going to touch on a few different events that you can bring the family to enjoy this holiday season.

We’re starting off with one of the biggest holiday traditions that has continued to ignite the spirit of Thanksgiving and Christmas holiday every year.

The Macy’s Thanksgiving Day Parade is one of the largest parades in the world, and has been going on since the early 1920’s. Ever since the early 1950’s, the parade has been nationally televised on NBC and reaches millions of viewers at home.

The iconic parade features several different marching bands, dancers, and celebrity guest singers and performers from all over the country. More importantly, it’s well known for the massive, colorful balloons that come in all your favorite cartoon characters, spanning several generations of famous characters. From SpongeBob SquarePants to Snoopy, it’s a fun-filled event for all ages.

It’s also probably good to know that if you do decide to go and sit or stand along the side of the parade, it’s a good idea to come prepared for cooler, windy conditions that can be hard to endure. Or, you can be like the other millions of viewers that instead watch it from the comfort of their living room Thanksgiving morning.

If the cooler and much windier weather coupled with dealing with traffic and massive crowds isn’t really your thing, our next event might be more of your style.

From the high-kicking Rockettes to wooden soldiers, the Christmas Spectacular Starring the Radio City Rockettes at the Radio City Music Hall is a must-see event. Every year, this wonderful holiday tradition brings together a special, one-of-a-kind New York experience.

The Rockettes have been dancing their way through several decades, performing and appearing at countless shows and holiday festivals around New York City. They are an iconic dance group that helps bring the spirit of the holidays to the city.

Even if you’ve been to the Christmas Spectacular before, each year the show continuously adds new music and technology, making it a spectacle to see each year. Tickets are available now and the show runs now through the beginning of January.

If you’re looking to save your money on holiday gifts and presents for your friends and family, however, this next event might be better suited for your style.

You might want to bring your best shopping shoes and attire for this next event because the Brooklyn Holiday Bazaar is a great place to get all your holiday shopping done in one place.

Shop through endless beautiful gifts from paintings to handmade and handcrafted items, all made and showcased by the best local, NYC-based makers and creators.

Not only does the event feature come packed with handmade goods, but shoppers can also get delicious food and drinks, listen to live music and even participate in craft activities for the whole family.

Located at 501 Union Street, this event was created in 2012 to celebrate and tell the stories behind local brands and businesses within the community.

And our tour doesn’t stop there! All aboard to our next event, which will surely be something to behold.

Train displays showcase more than 175 famous New York landmarks, from the Statue of Liberty, to the Brooklyn Bridge, to Rockefeller Center. And what makes the displays more unique is that everything is recreated from natural elements, such as bark, leaves, acorns and cinnamon sticks.

On top of all that, there’s a half-mile worth of train tracks throughout the displays, so there’s plenty to see for the whole family.

Our next event will fulfill all your winter wonderland dreams, so remember to bring your ice skates!

If you’re looking to dive into a winter wonderland, then look no further. The Bank of America Winter Village in Bryant Park has everything you need. With more than 120 shops, kiosks, food stands and more, there’s plenty enough for everyone to find something to do. Plus, the village includes a big outdoor ice skating rink for anyone to enjoy.

Although you do have to bring your own skates, the ice skating rink will remain open until March 2020, so there’s plenty of time to make your way down to the rink and have a good time.

For our last tour stop, we’ve saved one of the best New York City traditions to finish our grand tour of the season.

The Rockefeller Center Tree Lighting Ceremony is a magical moment to behold. Although the iconic lighting ceremony doesn’t take place until the weekend after Thanksgiving, it’s one of the greatest holiday traditions in New York City, attracting thousands of people every year from across the globe.

In early November, a tree arrives in the city, typically a Norwegian Spruce. Around the middle of the month, the tree is wrapped with thousands of lights and Swarovski crystal star is placed atop the enormous, beautifully decorated tree.

The tree will be lit for the first time of the holiday season in Rockefeller Plaza on Wednesday, December 4, from 7 to 10 p.m. Every season, thousands come from all over to watch the event and millions more watch the live broadcast. The tree will remain lit and on display until Friday, January 17, 2020.

The Rockefeller Tree Lighting Ceremony has been around for several decades and has taken on the roll of marking the holiday season for many New Yorkers and visitors alike.

For the last 13 years in a row, the Christmas tree has been donated to Habitat for Humanity once the holidays have passed and the tree comes down. The tree is milled, treated and made into lumber, which is then used for home building.

As a symbol of giving and hope during the holiday season, the tree lighting ceremony remains as one of the greatest traditions to see in the Big Apple.

The End of the Tour

Even though our tour officially stops here, there are countless more fun-filled holiday activities and festivals that take place in New York City, hence why they call it the “City that Never Sleeps.”

As we enter the season of giving in one of the world’s top busiest and brightest cities in the world, it’s important to remember the true meaning of the holiday season and to spend it with the people that mean the most to you.