The History & Evolution of Eyeglasses
Posted by Emily Pazel 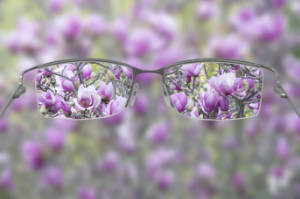 It’s easy to take things for granted, such as the pair of glasses or contacts you use on a daily basis to see the world a little better. In today’s society, people wear glasses almost as commonly as they wear shoes on their feet. In fact, more than 6 out of 10 people wear glasses or contact lenses in order to perform normal daily tasks, such as reading, writing, driving, and generally being able to see things around them.

There are several types of eye conditions and/or problems that can cause blindness or trouble seeing, but the most common problems for blurred vision is when light isn’t focused properly, causing refractive errors, which include:

Due to modern health and science evolution, people can commonly correct refractive errors by going to the eye doctor and using glasses, contact lenses, and even undergoing corrective lens surgery. The amount of people wearing glasses is so common that the fashion industry has taken over and has helped shape the hundreds of different frames, shapes, and colors of glasses that we see today.

But glasses haven’t always been so colorful or even accessible in the past. So, what did people do before glasses and everyday-wear contact lenses were invented?

Before a the Invention of Glasses

Nearsightedness, or myopia, has been around for longer than we realize. And, according to scientists, more and more people are becoming nearsighted at a rapid rate. By 2050, researchers and scientists predict that more than 4.7 billion people, roughly half of the global population, will be nearsighted at some point. But going back to before glasses and before nearsightedness escalated in numbers, what did people do to help their eyesight?

Since the earliest days of humankind, scientists believe that myopia has most likely been around in some form or another. However, it’s believed that it wasn’t as prevalent back then, and instead, is somehow linked to the evolution of education and learning how to read. On average, researchers believe that blurred vision for humans living thousands of years ago wasn’t really a problem and you wouldn’t see them squinting to see far distances in order to hunt or accomplish daily tasks.

As a matter of fact, scientists say that although genes and nutrition could play a role in the development of nearsightedness, they also believe that when people do a lot of close work or reading, their eyes become elongated. And as your eyes become elongated, you lose the ability to see at far distances. Overtime, this is believed to have happened to humans.

So, as we continue to evolve and become more educated and advanced, our eyesight grew a little worse. By the end of the 13th century, things would start to look a little better for the visually challenged, as eyeglasses were invented.

The Invention and Evolution of Glasses

In northern Italy, a region that was known as a glass production hub, the earliest known eyeglasses were invented. Merchants would carry spectacles along the Silk Road to Asia, where they served as a status symbol. These types of glasses, however, were more commonly associated with what we would consider to be a magnifying glass today rather than our typical eye accessories.

These early “eyeglasses” were held by hand and balanced on the tip of your nose instead of being worn directly on your face, and were intended to help people read for short periods of time rather than aid nearsightedness. They were also made out of heavy material and prone to shattering, according to early accounts.

Once literacy rates began to climb, along with education levels, spectacles became more common by the late 1600’s. By the 1700’s, eyeglasses began to be more constructed to how we wear them today, fitting snugly again the head so that they could be worn comfortably throughout the day. This is also when styles began to diversify rapidly and would start to come in different colors and materials.

Before prescriptions, researchers found that people would often try on glasses and choose a pair through trial and error, usually from a traveling peddler. By the 1800’s, people began receiving eye exams for glasses, and by the year 1862, a Dutch ophthalmologist named Herman Snellen invented the standardized eye chart that’s still used today.

Glasses have come along way since the dawn of their time. But the benefit behind glasses has remained the same – allowing humans to see the world around them a little better. As technology has advanced, we have even seen things such as sunglasses that have prescription lenses.

In recent past years, we have also seen a rise in Lasik eye surgery, which allows us to correct our vision with laser eye surgery or correction. So, will the future of glasses even have glasses in it? Or will we all just receive eye surgery at one point in our life?

Let’s take a dive into what the future holds for glasses.

The Future of Vision

The future of glasses might look a little different than we imagined. There has been an increase in interest among society for smart glasses, which are literally designed how they sound – they would allow users to receive information, similar to a smartphone, right in front of their eyes.

Although smart glasses sound more like a luxury than a necessity, another idea behind the glasses (other than sending information in front of your eyes) is to also help people who are visually impaired. In fact, some companies have already started conducting clinical studies on different ways smart glasses could be used as therapy to aid and improve overall sight. Although it sounds far fetched, smart glasses could even potentially help people that are close to being fully blind.

Other ways smart glasses could be used is for high-definition video recording, magnifiers for zooming in, virtual reality to enhance visual experiences, as well as presenting obstacles in the distance for personal safety.

However, the biggest problem with accessing smart glasses for the general public as of today is the price. Currently, smart glasses can range from anywhere between $6,000 - $10,000, and are most likely not covered by insurance companies. This factor alone puts smart glasses in the luxury category for now. But who knows, maybe smart glasses, similar to electric cars, will come down in price and eventually become a regular commodity. Until then, however, at least we’ve come a long way from a one-size-fits-all type of glasses, and that we can pick colors, shapes and different designs to make glasses a fun accessory to wear.

As the evolution of glasses continues into the future, the ultimate goal would be for everyone to be able to experience perfect vision, no matter the situation or financial background of the individual.