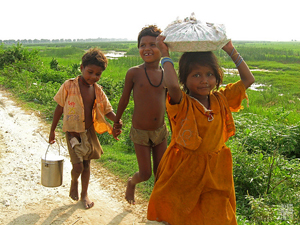 Antibiotics improve the height and weight of children on the brink of undernourishment in developing countries.

This is according to the research team at McGill University. They reviewed research literature to examine whether antibiotics have a significant impact on the development of the youngest children from countries with low to middle income class. The paper was published in the British Medical Journal.

Antibiotics did not have any significant effect on the growth of children from the countries of Malawi, Guatemala, Brazil, and Zambia.

But the McGill team wanted to determine if antibiotics have any effect on the development of pre-pubertal children in developing countries. They examined the changes in both the weight and height of the children by looking into the research literature about studies conducted on the treatment of one-month to 12-year old children in seven developing countries. These were children who are smaller both in terms of weight and height when compared to nourished children of similar age.

The team found that antibiotic treatment led to an increase of 23.8 g per month in weight and 0.04 cm per month in height among the young children. They studied the results of 10 trials that included 4,316 children. After taking into account the age difference among these participants, the changes in the height were larger among the youngest children and the changes in the weight were biggest among the children in Africa.

Malnutrition has been pointed as the cause of the growth of microbes and infections in the gut. Although the study was not able to conclude why antibiotics have such an effect on the growth of the children in the trials, they may change the way the microbes behave or get rid of the infections. But the use of antibiotics still has a few risks.

The research team was able to confirm that antibiotics do have a significant impact in populations with higher risk to undernourishment. However, they know that more research has to be conducted to examine the reasons why antibiotics have led to such growth in children.

You may learn more about antibiotics and malnutrition in the links below.