E-Cigarettes: Their Rise, Risks, and Future
Posted by ST 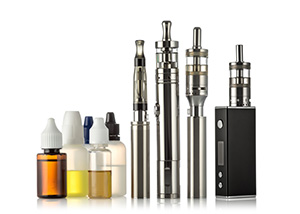 We’ve come a long way since the “More doctors smoke Camels than any other cigarette” ads of the 1940s. Though still a multi-billion dollar industry, the number of smokers today has significantly decreased due to both the scientific data available and the growing social stigma behind the activity. A Center for Disease Control report found that the number of smokers in 2015 had fallen nearly 10 percent since 1997, signalling the lowest number of smokers ever recorded. However, this doesn’t necessarily mean that people aren’t smoking anymore—many of those who have quit smoking tobacco have just found a different way to exercise their habit.

The past handful of years has given rise to the era of electronic nicotine delivery systems, or ENDS. As the name suggests, these devices allow the user to inhale an aerosol of nicotine and other substances (such as flavoring) and exhale a cloud of vapor instead of smoke. ENDS can take many forms, such as e-cigarettes, e-cigars, and vapor pens, and have a number of slang names like e-cigs, e-hookahs, and vapes.

The prominence of ENDS today is staggering—another report from the CDC has found that 3.7 percent—about 9 million—American adults participate in e-smoking in some form. You have no doubt seen it, too; countless people walk around in public taking long drags from a pen or box-shaped device, deploying a billowing cloud of “smoke” that often leaves behind a fruity or herbal smell.

You’ll often hear users herald e-cigarettes as a safe—or safer—alternative to smoking a normal cigarette. In some ways, this is true—e-cigarettes, unlike their conventional counterparts, do not require combustion of organic materials, which is the chemical reaction that is most attributed to the multitude of diseases that potentially plague cigarette smokers. Some will even credit e-cigarettes with saving their lives. However, despite eliminating the combustion factor from smoking, the proclaimed healthiness or even safety of e-cigarettes may be ill-founded.

The activity has only gained traction in the past few years, and there is very limited research on the short- and long-term effects of e-cigarettes. As time goes on, however, more and more evidence is surfacing that may make e-cigarette users rethink their decision.

What exactly has made e-cigarettes popular? What are the current known health risks? What will the future of e-cigarettes look like? It took centuries to unearth the dangers of and lay out stringent regulations for tobacco usage. Will e-cigarettes undergo the same transformation?

The Rise of E-Cigarettes

The concern about underage smoking is nothing new. Teens have been finding ways to illegally obtain cigarettes for decades, and it just so happens that the adolescent years are a critical time to pick up the habit—9 in 10 people who began smoking in their teenage years continue to smoke into adulthood. Recently, however, there has been a shift of interest from cigarettes to e-cigarettes for many teens.

What is it about e-cigarettes that are so appealing? A recent study conducted by the Canadian Medical Association Journal described the “cool/fun/something new” factor as one of the biggest motivators for trying e-cigarettes. E-cigarettes often come in various flavors and novelty designs that can attract a younger audience. It was for similar reasons that the FDA placed a ban on the production of flavored tobacco cigarettes in 2009. However, the regulation has yet to reach e-cigarettes. Other studies indicate that peer and family influence can also have an influence on a teen’s decision to smoke e-cigarettes.

There is also the concern that e-cigarettes act as a gateway for a teen to smoke cigarettes later in their life. Another study conducted in Los Angeles found this to be the case—of more than 3,000 students in LA County public schools, those who were into vaping at the beginning of their sophomore year were more likely to become traditional cigarette smokers over the next six months.

An “Alternative” to Smoking

There is almost an inherent notion that choosing to smoke an e-cigarette over a regular cigarette is a far safer and healthier option. On the outset, it only seems to make sense—inhaling vapor should be healthier than inhaling smoke. Many smokers will make the switch to e-cigarettes for this very reason. Many major anti-smoking campaigns will even condone the switch, such as one coining the decision as “the lesser of two evils.”

As mentioned earlier, e-cigarette use has gained monumental popularity in a short amount of time, giving experts very little chance to study the effects. Dr Jessica Wang-Rodriguez, professor of pathology at the University of California, San Diego, is not convinced they are safe. “Based on the evidence to date I believe they are no better than smoking regular cigarettes,” she says. We will discuss her work in the field a bit later.

While there haven’t been studies conducted at the caliber of traditional cigarettes, evidence about its own risks is surmounting quickly.

The Surgeon General Speaks Up

In December 2016, the US surgeon general released a comprehensive report on the dangers and concerns of the use of e-cigarettes by younger generations. Titled “E-Cigarette Use Among Youth and Young Adults”, the report drew a number of conclusions about the behavior and health effects of e-cigarette usage, some reaching beyond the scope of just youth and young adults. The report declared that the flavors in e-cigarettes are a large motivating factor in youth usage, e-cigarette aerosol is not safe, and e-cigarette use is strongly associated with the use of other tobacco products among youth and young adults. The surgeon general also cited the use of e-cigarettes amongst youth as a significant public health concern.

Aside from this groundbreaking report, there have been numerous other studies about varying detrimental effects of e-cigarettes over the years.

The component that makes an e-cigarette tick is the nicotine liquid, also called “e-liquid.” This liquid is usually made up of a solution of glycerol, propylene glycol, nicotine, and various flavorant chemicals. On its own, the e-liquid is harmless, but as one 2015 study indicates, what happens inside the e-cigarette can be a bit more dangerous.

Researchers from Portland State University released a report in the New England Journal of Medicine that highlighted the carcinogenic effect of the reaction between the e-liquid and different levels of heat inside the e-cigarette. The liquid, when heated, causes a thermal decomposition of the glycerol or propylene glycol and results in the emission of formaldehyde, a known carcinogen. The report states that the level of formaldehyde varies depending on the voltage pushed through the e-cigarette—low voltage (low heat) yields small traces of the chemical, while high voltage (high heat) produces a much more significant level.

While formaldehyde is also found in cigarettes and at much higher levels, the amount of formaldehyde emitted from an e-cigarette over a prolonged period is still cause for concern.

The harmful effects of e-cigarettes can be found all the way down to the molecular level. A group of researchers at the University of California recently studied the effects that the nicotine has on DNA. Dr. Jessica Wang-Rodriguez, mentioned earlier, was one of the lead researchers in the study.

Her team was able to obtain their results by creating an extract out of e-cigarette vapor and use it to treat human cells in a lab. They created two different types of extract: one with nicotine and one without. What they found was all cells exposed to the extract died far sooner than those that were left untreated. Furthermore, cells that were treated with the nicotine extract died 50 percent faster than the cells treated with non-nicotine extract. At the DNA level, the nicotine-free extract caused more frequent DNA breaks, but they observed that the nicotine extract caused three times the amount of breakdown per individual DNA strand.

These types of alterations to cells and DNA carry a myriad of issues, including potential deformation in unborn children and increased risk of cancer. These results show that nicotine is not the only factor at play in damaging the molecular and cell level. Wang-Rodriguez and her team plan on continuing their work to pinpoint the exact chemical that is at the root of the problem.

It is a well-known fact that prolonged use of cigarettes drastically increases your chance of heart complications. Individuals who smoke are twice as likely to have a heart attack compared to non-smokers. When you consider e-cigarettes, the question is clear: Is someone who smokes e-cigarettes susceptible to the same fate as a regular smoker?

A study released by researchers at UCLA in March 2017 set out to answer this question. The researchers observed a group of e-cigarette users and a group of nonsmokers to monitor their heart health over time. What they found was that the e-cigarette smokers were subject to increased sympathetic predominance, which is the involuntary overutilization of the nervous system. Additionally, oxidative stress was observed in those regularly using e-cigarettes. Both of these conditions are heavily connected with increased cardiovascular risk.

Again, while inconclusive as to its direct link, it would seem that there is a strong correlation between the effects of cigarettes on heart health and e-cigarettes.

The Future of E-Cigarettes

The FDA Steps In

For many years, the e-cigarette industry had a seemingly free ride in terms of regulation. However, that came to an end in May 2016 when the Food and Drug Administration extended its authority to include all forms of ENDS amid building evidence of their influence and health risks. The business of e-cigarettes and the construction of vape shops had become a new advertising category and, before the FDA’s intervention, had very little regulation on the presentation and sale of their products.

Under the new regulation, all e-cigarette companies have been required to apply the same warning labeling as tobacco products on packaging and in ads that outline the inherent risks of smoking. The FDA has also banned the use of any phrase that might make the viewer insinuate that e-cigarettes are healthier than smoking. For right now, this ruling applies only to labeling and non-broadcast advertisements.

The e-cigarette phenomenon is still a new a rapidly growing activity and industry. As time goes on and popularity swells, the act of smoking e-cigarettes is bound to go under further scrutiny. It has only been a few years since the new smoking method hit the mainstream, and already scientists have begun to unveil convincing evidence that the socially- and commercially-prescribed “healthiness” is empirically flawed. Who knows? It may only be a matter of time before smoking e-cigarettes are placed on the same level of cultural stigma as tobacco.