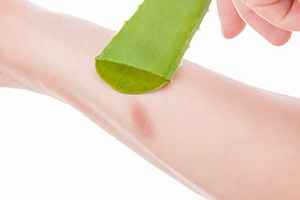 You have no doubt incurred some sort of burn in your lifetime. Whether you’ve scalded your hand with boiling water while cooking, developed a blistering sunburn after a long day at the beach, or something worse, burns can range from slight annoyance to life-threatening.

Thanks to advances in medicine and our overall understanding of what happens when a person gets burned, we are now more than ever better equipped to treat victims of burns. This has drastically decreased the mortality rate that we see from severe burns today—in 1952, victims of more than 50 percent total body surface area burns had only a 50 percent chance of survival. Today, victims of the same severity of burns have a 98 percent chance of recovering from their injuries. This is due in large part to changes in initial assessments and procedural actions in the time shortly after a burn takes place.

While these advancements in conventional medicine have improved conditions on the more severe side of burn cases, it is fairly unlikely that that you will be in a life-threatening situation where there won’t be professional intervention. It is important for everyone to know how to assess and treat minor to moderate burns, and it is times like this where the use of more holistic, traditional methods can be of great utility.

Traditional medicine is defined as the knowledge of the use of substances, practices, and beliefs for medicinal purposes that have been developed and propagated culturally. Traditional medicine typically predates the era of modern medicine, which means the various practices developed during this time have not historically been based on scientific fact. Conversely, conventional medicine is the modern techniques that have come into practice on the basis of scientific scrutiny.

Before the advent of modern medicine, people of all continents, races, and ethnicities have been known to take part in the idea now known as traditional medicine. Spirituality, therapy, and the use of organic materials are just a few of the modalities that fall under this category of medical treatment.

While traditional medicine practices were largely founded upon belief and case-by-case basis, these methods should not be reduced to myth. With modern science, we are now able to look back on these practices and put their legitimacy to the test. To this day, countless traditional remedies have withstood scientific dissection, while some have failed to be founded upon any significant scientific evidence.

We will discuss various substances that have been linked to burn treatment and their efficacy later.

To understand holistic burn treatment, it is important to know the benefits of moist wound care. For years, it was thought that keeping a wound open and exposed to air was the best way to quick healing. Then, in the 1960s, several clinical trials were held to study the difference between dry and moist wound care. These studies concluded that moist and covered wound treatment was far more effective of a treatment method.

There are many benefits to keeping a wound moist and covered—including the debilitation of bacteria and scab formation—and it promotes overall wound healing speed. This has led moist wound treatment to be the medical norm today, and the majority of holistic remedies take liquid or gelatinous form.

A Comparative Study of the Effectiveness of SSD and MEBO

A long-standing burn dressing, Silver Sulfadiazine, or SSD, has been a mainstay in the treatment of burns for over 100 years. However, the use of silver for medicinal purposes greatly predates this product—silver has been widely used for its antibacterial properties for thousands of years. Despite its more traditional roots, SSD is still considered a conventional product due to its manmade nature.

Moist exposed burn ointment, or MEBO, is an herbal remedy of Chinese origin dating back to the 1980s. MEBO comprises entirely natural agents dating back to ancient China, which connects it to a more traditional, holistic approach to healing.

In 2009, a report was published by the National Center for Biotechnology Information that studied the healing ability and long-term effects of SSD and MEBO on burn wounds. The experiment was conducted on ten rats that were divided into two groups of five and acclimated in identical conditions for two weeks. After the acclimatization period, partial thickness burns, or second-degree burns, were created on each rat of equal size and severity. Over the next eight days, one group of rats received an application of SSD, once every 12 hours, and the other received an application of MEBO every 8 hours. After the eighth day, all specimen were opened up for examination.

Upon completion of examination of all the rats, the conclusion was reached that both SSD and MEBO were comparable in their healing abilities of the animals—at the end of the 8-day treatment, the affected skin had fallen off and left a new, tender section of replacement skin.

Upon further inspection of the rats, it was found that despite its outward healing properties, SSD ointment can lead to future problems. This is due to the known toxicity of the purified substances that make up SSD. These toxic ingredients, such as silver nitrate, are linked to causing electrolyte imbalance in the body, which can lead to a host of health problems down the road.

The study reached two conclusions: (1) due to its healing ability and its unobtrusiveness in the future health of the body, MEBO is the more ideal solution for the treatment of burn wounds, and (2) these healthful properties will spur people into considering this more holistic alternative.

MEBO is just one of many natural remedies used in the treatment of burns. Let’s take a look at some other holistic methods that have been proven to be an effective burn treatment.

It’s almost an instinctive reaction—fight the heat with water. When you or someone else around you burns themselves, your first thought is to get the affected area into something cold.

Now, while water is naturally occurring and could be considered a holistic remedy, it is not a cure unto itself. It is the universal first step to treating a burn: it helps soothe the burned area and fight the progression of damage and potential infection. However, there are dos and don’ts of applying water to a burn injury, and there is contention around what temperature of water is the most effective at treating a burn.

It is thought that running water over a burned area is only effective during a certain time frame. Applying water to a burn immediately after the injury occurs is the optimal time to administer the treatment. Once the water is applied, it is widely held that prolonged exposure to water is not effective: 15–20 minutes is the maximum amount of time that the burn should be placed under the running water. You should also only use water in liquid form—ice is not useful in the treatment of a burn, as it may cause frostbite and further damage the skin.

There have been conflicting studies about the temperature of water used on burns. One study claims that cold water is the most effective in relieving pain and reducing damage, while another holds that warm water is the better solution. With the conclusion still up in the air, it might be wise to follow the Goldilocks principle: not too hot, not too cold.

Another popular holistic remedy, aloe vera has been found recorded on Sumerian tablets dating back as far as 2100 BC. Heralded for its moisturizing and healing properties, the naturally-occurring gel is found in the leaves of the tropical plant of the same name and can be grown just about anywhere. Recently, aloe vera has found huge commercial success: it’s found in everything from beauty products to consumable health supplements.

One of aloe vera’s most popular uses is in the treatment of sunburns. When applied to the skin, the cool, slimy gel can offer a soothing relief to the minor to moderate radiation burn. Although there has been little research conducted into the efficacy of aloe vera as a burn treatment, the few studies that have taken place have built the foundation that points to the legitimacy of the plant as a medicinal solution to burns.

Honey has been used for thousands of years for various health benefits. Today it ranks among the recently-coined “superfoods”—it is one of the few substances that can support life completely on its own. Aside from the benefits of consuming honey, it has been scientifically proven to be a powerful natural wound dressing.

Recent studies have proven the antibacterial and healing effects of honey on burn wounds. The studies pitted a number of organisms known to cultivate on burns against various concentrations of honey, and none of the organisms were able to survive even a 30 percent concentration of honey. These trials were conducted using raw, unheated honey, so it is not recommended that you start rubbing store-bought honey on burn wounds.

Having a healthy, balanced diet is the hallmark to promoting equilibrium in the body and therefore leads to quicker healing of ailments and wounds. The healing of burns is no exception.

A 1997 study that outlined recent advancements in burn treatment found that patients with severe burns—covering at least 40 percent of total body surface area—have metabolic rates that are 100–150 percent above their basal rate. These patients have increased energy and protein requirements that must be satisfied in order to prevent impaired wound healing, cellular dysfunction, and decreased resistance to infection. Proper nutrition during this time was key in decreasing healing time. Currently, the exact nutrient requirements of burn patients are not clear, although it is accepted that maintenance of energy requirements and replacement of large protein losses are vital.

Everyone swears by their own home remedy to various ailments. These methods are typically holistic and can be easily found in most homes, but they have failed to show any scientific evidence of their effectiveness.

Home remedy enthusiasts will tell you that just about every type of food in their pantry has some kind of healing benefit, and that covers burns. It is a popular notion that burns are soothed and healed by fatty substances—oil and butter are just a few examples. However, these raw substances have been proven to be ineffective treatments for burns, and are potentially proponents for spreading bacteria. Other popular home remedies for burns that have been disproven include egg whites, flour, and tomatoes, all for similar reasons.

While there have been boundless advancements in our understanding of burn assessment and treatment, sometimes you simply have to look back to the roots of all this medicinal discovery. Certainly, severe burn treatment should be administered by a healthcare professional, and no one holistic remedy is guaranteed to be 100 percent effective. However, as evidence surmounts, perhaps we will begin to better understand how we can take these rudimentary treatments and apply them to our conventional understanding of medicine to surface a flawless remedy to burn injuries.