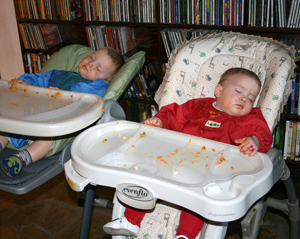 Kids who don’t get enough sleep tend to make up for it with food, according to research.

The study was conducted on 16-months-old kids. It showed that those who only slept for less than 10 hours at night ate 150 kcal more than those who slept for 13 hours or more.

The research studied the children of 1,303 UK families, particularly their sleeping patterns at 16 months old and their diet at 21 months old.

Figures showed that there is a difference of in the kcal consumption between the two groups, as the kids who sleep more only consumed 982kcal, while the kids who sleep less consumed 1087kcal. This was the first research that showed the relationship between sleep and energy intake among kids younger than three-years-old.

The study was targeted towards this age group when weight gain is still uncommon, helping establish the possibility that kids this young gain weight from increased energy intake due to lack of sleep.

However, the research could not explain the change in appetite. Researchers think it could be due to the change in hormones that control appetite caused by not getting enough sleep.

It is already established that the lack of sleep could trigger obesity, but it is not something that was certain among kids. The study aimed to find out whether shorter sleep would cause them to eat more. Earlier studies have shown that sleep loss among adults and older kids usually increase their appetite. But this link could not be clearly determined among young kids, whose parents often dictate how much and when they should eat.

The bottom line is that kids who sleep less may eat more, which is something that parents should know about. However, the reason behind this relationship still needs more research.

To learn more about child sleeping and eating patterns follow the links below.