The Re-emergence of Smallpox
Posted by Sandy Thompson 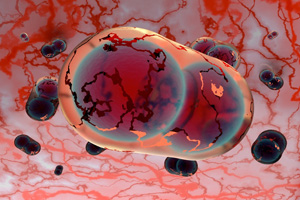 Over the last year, talk about a possible smallpox re-emergence has been spreading. We will take a deeper look into this historic disease and try to determine why there is a growing concern, how can it affect us all and what can we do to protect ourselves?

“Smallpox was eradicated in 1980 but in 2017, Canadian scientists created a smallpox-like virus in a lab using just mail-order DNA” said UNSW Professor of Infectious Disease Epidemiology Raina MacIntyre. “In 2018, these same scientists published a step-by-step method to create a pox virus in a lab, making the threat of smallpox re-emergence even greater.”

Why is this so alarming? The only remaining stockpiles of the actual smallpox virus is heavily guarded, but with this scientific breakthrough in creating a smallpox-like virus without needing any of the remaining smallpox samples, bioterrorists wanting to create a massive viral weapon is now a reality. Additionally, we currently have an unprecedented level of populations with weakened immune systems, which would make fighting such an outbreak difficult.

Who would be at risk?

Based on research by Professor Raina MacIntyre, and published in the US Center for Disease Control and Prevention journal “Emerging Infectious Diseases”,

Individuals under the age of 20 would have the highest rates of infection, because they have never received the smallpox vaccination. But individuals 45 years and older, would have the highest number of fatalities due to infection. These older populations would be highly susceptible to smallpox, because their rates of immunosuppression are higher and their immune system naturally declines as they age.

How could an outbreak affect us?

As stated in the Journal of Bioterrorism & Biodefense article published in 2011, “the likelihood of the recurrence of an eradicated agent, such as smallpox, is small, but ultimately unknown and expectedly increases with time primarily due to the rapid advancement of biotechnology”.

Smallpox is caused by the variola virus. It is spread by secretions from the patient’s mouth and nose, and by material from pocks or scabs. It is transmitted directly from one person to the next.

Per the Center for Disease Control and Prevention, there are four main clinical forms of smallpox: Ordinary Smallpox(Variola Major), Modified-type Smallpox, Flat-type (malignant) Smallpox and Hemorrhagic Smallpox. Ordinary Smallpox was the most common form and accounted for over 85% of all the cases during the smallpox era.

Below are the phases of Ordinary Smallpox as listed by the CDC:

There is no proven treatment for the smallpox disease. There are some antiviral drugs that help to treat it or prevent it from getting worse. Smallpox can be prevented by the smallpox vaccine if it is administered before contracting the virus. Once you have developed the smallpox rash, the vaccine will not protect you.

Per the CDC, “currently, the smallpox vaccine is not available to the general public because smallpox has been eradicated, and the virus no longer exists in nature. However, there is enough smallpox vaccine to vaccinate every person in the United States if a smallpox outbreak were to occur.”

The origin of smallpox is unknown, but it is thought to date back to the Egyptian Empire around the 3rd century BCE (Before Common Era), per the CDC. On average 3 out of every 10 people who contracted smallpox died. The survivors wore lingering scars as evidence they suffered from the devastating disease.

The first plan to rid the world of smallpox was initiated by the World Health Organization in 1959, but did not intensify until 1967. Overall, smallpox killed approximately 300 million to 500 million people worldwide in the 20th century.

The last recorded case of smallpox was in October of 1977 and on May 8th 1980, the World Health Assembly declared smallpox eradicated. Since the smallpox vaccination caused a portion of the population to suffer severe side effects, the World Health Organization recommended a stop to widespread smallpox vaccinations in all countries after eradication. As a result, humankind has lost immunity not only to smallpox, but also to other zoonotic orthopoxvirus-caused human infections.

Is smallpox still around today?

There are only two known locations where the variola virus is officially stored and handled under the World Health Organizations supervision: the Center for Disease Control and Prevention in Atlanta, Georgia, and the State Research Center of Virology and Biotechnology (VECTOR Institute) in Koltsovo, Russia. No cases of naturally occurring smallpox have been reported since 1977.

With the recent release of the recipe to synthesize the horsepox virus, scientists are concerned that the same techniques could get into the wrong hands and result in the re-creation of any virus in the poxvirus family, including the variola virus, which could then be manufactured as  a bioweapon. Additionally, experts are warning that as the Siberian tundra continues to melt, corpses of those who died during an epidemic that occurred over 120 years ago may resurface, and if that happens, the disease might as well.

The importance of being prepared for a potential outbreak are being stressed world wide. As a result, new generations of safer vaccines are being developed. Additionally, by increasing  education for medical specialist, we will be prepared to quickly identify, contain and treat individuals showing signs of the variola virus.

What can we do to protect ourselves?