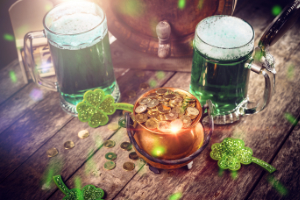 St. Patrick’s Day is an iconic holiday that’s filled with many traditions to celebrate all things Irish. From great green shamrocks to leprechauns depicted with a pot of gold. This fun-filled holiday is celebrated around the world each year on March 17th. According to History.com, the Irish have observed this day for over a thousand years, celebrating Saint Patrick who is credited with introducing Christianity to Ireland.

As the traditions continued through the decades, the Irish holiday spread its celebration across the globe with parades, parties and other celebrations all over the map. In major cities across the United States, rivers are dyed green, parades are watched by thousands of spectators and local pubs and restaurants serve famous holiday food staples, such as corned beef & cabbage and adult beverages.

Even though festivities that draw in large crowds, parades and other big parties might be postponed or cancelled again this year due to the coronavirus pandemic, you can still celebrate it with family by wearing green or supporting your local restaurants by ordering foods that have been dyed green colors. After all, there are certain traditions you won’t want to miss.

The biggest and probably most recognizable St. Patrick’s Day tradition is using the color green, which stems from the symbol and image of the shamrock and from the island itself. According to National Geographic, the mere fact that Ireland is “green with leafy trees and grassy hills,” gives it the nickname the Emerald Isle. With Ireland’s green landscape coupled with the shamrock, Ireland’s national symbol, the green color stuck as a staple to the holiday. There is a well-known legend, per History.com, that St. Patrick used the shamrock (or three-leaved clover) to explain the Holy Trinity: the Father, the Son and the Holy Spirit.

Have you ever been pinched on St. Patrick’s Day for not wearing green? Many of us have. But have you ever wondered why? Irish Central states that by wearing green on St. Patrick’s Day leprechauns can't pinch you because the color makes you invisible to them. Leprechauns are one of St. Patty’s Day's popular holiday symbols which comes from Celtic belief in fairies or tiny people that could use magical powers. In these folktales, leprechauns were typically grumpy creatures that were responsible for mending the shoes of the other fairies. History.com explains that leprechauns were known for protecting their pot of gold by using tricky tactics.

Although corned beef and cabbage seem to be the most popular St. Patrick’s Day dish, did you know that this is more of an Americanized Irish meal? Beef, according to Irish Central, wasn’t easily accessible and considered more of a luxury in Ireland. The more traditional St. Patrick’s Day dish includes ham and bacon. When Irish settlers first came to America, corned beef was cheaper and easier to find, and so this became the tradition for generations around the country.

Traditional Irish soda bread is also another popular item you can typically find yourself enjoying on St. Patrick’s Day. In Ireland, soda bread tends to be plainer and more restrained with ingredients. When done correctly, Irish soda bread is best eaten still steaming from the oven and slathered with good salted butter that melts in your mouth. It goes great alongside the traditional corned beef and cabbage meal.

Between the leprechauns, the shamrocks, the pot of gold and all the food ready to be eaten, what could be missing other than a nice, refreshing pint of green-dyed beer. On St. Patrick’s Day, according to USA TODAY, the drink of choice is the Irish stout, a Dublin-based beer. And on a normal day, Americans drink roughly 600,000 pints of Guinness. But on this special day of the year, about 3 million pints are consumed, according to Guinness.

So, now that you have all the St. Patrick’s Day traditions down, it’s time to celebrate. And even though the famous holiday might look a little different this year without large crowded restaurants, pubs and big celebrations, there are still some holiday traditions that will continue.

Believe it or not, people in Ireland have been celebrating St. Patrick’s Day since around the ninth or tenth century. But the first ever parade to celebrate the Irish holiday actually took place right here in the United States, when a Spanish colony in St. Augustine, Florida pieced together a parade on March 17, 1601.

Fast forward more than a century later to March 17, 1772, Irish soldiers that were serving in the English military marched in New York City to honor the Irish patron saint. From that point forward, parades and other celebrations started to pop up in other early American cities and continued to grow into the festivities that we see today.

In fact, in 1848, History.com explains that several Irish groups came together to unite their parades and formed the official New York City St. Patrick’s Day Parade, which is the largest civilian parade in the world and the largest in the United States. The parade brings together over 150,000 participants, and nearly 3 million people line the mile and a half parade route. Other big cities around the country that host large parades include Boston, Chicago, Philadelphia and Savannah.

One of the most well known St. Patrick’s Day traditions in the United States is when the Chicago River is dyed green. According to History.com, the tradition began in 1962 when city pollution-control workers found a way to trace sewage discharge by using dyes. That same year, they decided to try dumping more dye into the river in order to change the color for a week. They released 100 pounds of green vegetable dye into the river, which might not have been the most environmentally friendly idea. Today, two families – the Butler and Rowan clan – dump 40 pounds of dye into the river to keep the tradition alive each year. Per the Chicago Tribune, the crew drops an orange powder made from a “top secret recipe” by a sifter into the river, dyeing it for a few hours that day.

Chicago and New York City aren’t the only places where St. Patrick’s Day traditions happen. The famous Irish holiday is celebrated around the world, but especially throughout the United States, Canada and Australia. Other big celebrations take place in Ireland in Dublin and Belfast, as well as in Japan, Singapore and Russia.

Interestingly enough, in Japan, they host a St. Patrick’s Day parade that brings in as many as 180,000 attendees. And according to Irish Central, there are strong cultural ties between Japan and Ireland due to their shared history as “insular island cultures,” and the flouring of Irish music and dance in Japan.

Although social distancing and the coronavirus pandemic has put a damper on this year’s festivities, some St. Patrick’s Day traditions will continue as always. And even if some in-person events are cancelled or postponed, try to find some virtual activities such as watching the river get dyed green. Whatever you decided to do this holiday, make sure to wear your green, eat some corned beef and cabbage and be on the lookout for those tricky leprechauns lurking about.